Made in China, loved everywhere

Made in China, loved everywhere 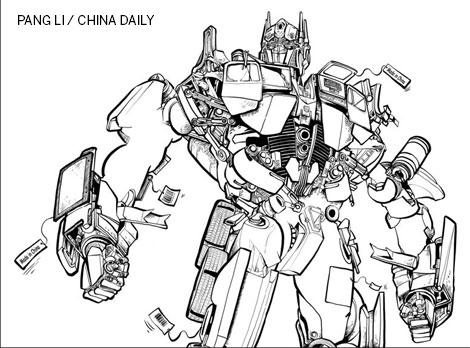 Product placement has long been ubiquitous in Hollywood movies. Everyone who watched the 1981 blockbuster E.T. remembers ET croaking out "Reese's pieces" while happily munching down the trail Elliot has left for him. In his later film, The Lost World: Jurassic Park, Steven Spielberg made sure to include the Mercedes Benz logo in the close up shots of the SUV that Jeff Goldblum and his team use to explore the park.

But the latest Transformers movie, Transformers 3: The Dark Side of the Moon, which opened in China in late July, breaks new ground in the product placement department by featuring four famous Chinese brands.

A TCL flatscreen TV makes a brief appearance in the film, while the spiky haired robot, Brains, transforms itself out of a Lenovo Edge Computer. The protagonist of the film, Sam, sports a T-shirt from Meters/Bonwe, a mid-level Chinese retailer with a large follower among hip, younger clothes buyers in China. And in one scene, a scientist says he needs to quickly finish his Yili Shuhua low-lactose milk first.

This development underscores how China is once again reinventing itself economically. The latest makeover involves moving from producing cheap clothing and toys to higher-end products. Companies like Lenovo, which lobbied hard for product placement in Transformers 3, are determined to compete globally on the basis of quality and brand name recognition.

Data on the Chinese economy clearly point to this shift in its manufacturing mix. According to a report, authored by Will Freeman of GaveKal Research in Beijing, the share of high-tech products in China's exports has risen from 19 percent in 2000 to 25 percent in 2009.

In the past, these high-tech exports consisted of products whose components, like computer motherboards, were made elsewhere, in South Korea and Japan, for example, to be assembled in China. That is no longer the case, for Suzhou has become a key production base for sophisticated X-ray printers and network routers and switches.

The GaveKal report shows that China's rapid emergence as an exporter of capital equipment, as opposed to primary and light manufactured goods. In fact, during the past decade, China's share of global exports of capital equipment has quadrupled, from 2 to 8 percent.

Finally, China is emerging as the new global renewable energy giant, too. In 2009, for example, it overtook the United States as the world's largest market for wind turbines, while State-owned power plants are competing to see who can build solar plants the fastest.

The turbine will provide electricity for a wastewater pumping station in the Boston suburb of Charleston. The report also said that China's fifth largest wind turbine producer, Ming Yang Power Group, has set up a sales office in Dallas, Texas.

The Chinese government has long supported renewable energy through its "863 Program". Now, the 12th Five-Year Plan (2011-2015) calls for doing the same for higher-end capital equipment.

This trend will naturally raise new fears about Chinese economic competition in the US and Europe. But while some businesses in the West will undoubtedly be squeezed, the GaveKal report says that others will benefit from having access to lower cost capital equipment to boost their productivity. As Freeman was quoted as having said in a July 23 article in Toronto-based The Globe and Mail: "The story of Chinese export deflation is far from over."

Moreover, within China, the move to higher-end manufacturing will boost Chinese wages, thereby expanding the global consumption pie both for Chinese and Western companies.

In any case, China has no choice but to transform itself into a manufacturing power, because its low-wage cost advantage is being rapidly eroded. According to the Asia-focused investment and advisory company Intercedent, rising wages and the expected revaluation of the yuan means that mid-tier manufacturing wages in China will be equal to minimum wage levels in the US by 2017.

Once that happens, the production of cheap clothing, footwear and apparel will be repatriated back to developed countries or shift to newly emerging economies like Vietnam and Bangladesh, enabling the latter to develop more rapidly.

Thus the latest stage in China's rapid economic rise is surely a win-win for the aggregate world economy. And with the US becoming less and less governable by the day and Europe trapped in a common currency that it can neither retreat from nor manage effectively, the world economy needs a new leader and growth engine.

So expect to see more and more made-in-China products on movie screens.

The author is an American corporate trainer in China.