Sitting in the lap of luxury

Sitting in the lap of luxury

As if tuned to the tempo of the conductor's baton, the orchestra of the world's top fashion houses is playing a crescendo of price increases with surprising gusto.

The well-orchestrated move has shocked observers from New York to Shanghai, coming, as it does, at a time when demand for a pair of 3,600 yuan ($557) jeans from Prada SpA or a 9,600 yuan bag by Gucci SpA is widely expected to be doused by the unfolding debt crisis in Europe and the threat of a double-dip recession in the United States. As such, the orchestra should rather be playing diminuendo. 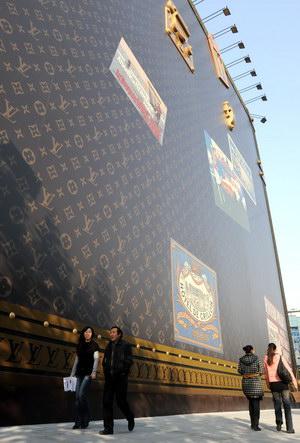 A Louis Vuitton advertising logo in Shanghai. Surges in the prices of luxury goods have failed to dampen demand for such high-end brands in China. [China Daily]

However, the Chinese audience is crying out for a march. While consumers in Japan, the United States and Europe are scrimping on luxury goods, the swelling ranks of big spenders in China are taking in whatever the "haute" houses in Paris or Milan can serve up. With demand underscored by an army of Chinese consumers, luxury brands feel no constraint in boosting their prices to cover rising costs and foreign exchange losses.

The price of an Amazona bag from the Madrid-based luxury clothing and accessories brand Loewe (a division of LVMH Group) soared to 22,000 yuan from 18,000 yuan in one week, a rise of more than 20 percent.

Known as "Jeweler to Kings, King of Jewelers", the Paris-based luxury jeweler Cartier SA assumed its role in this price-rise symphony as early as March 17. A gold ring from the company's Love series has seen its price surge to 6,800 yuan from 6,100 yuan, up about 11 percent.

And while Cartier fans have not fully recovered from this unexpected price increase, it is now widely rumored that price will surge again this month.

Indeed, almost all the big European luxury names, including LVMH Group (Louis Vuitton), Dior SA, Burberry Group Plc and Celine SA, have raised their prices by between 5 and 15 percent on average in the first five months of this year.

The depreciation of the euro is considered one of the main reasons for these increases, according to a recent report released by the World Luxury Association (WLA), an international nonprofit organization that specializes in market research and the management of luxury brands.

Between the beginning of 2010 and the end of May this year, the euro has depreciated by 20 percent against the yuan. Although the depreciation has brought these brands unprecedented high sales from overseas, the values of the brands themselves have shrunk severely. Therefore, raising the price of the products is a way of minimizing the losses from exchange-rate depreciation.

Meanwhile, the report also pointed out that prices for luxury brands usually increase by between 10 and 30 percent on an annual basis. However, whether it's an increase or decrease, the prices are changed before new products are put on the market, or once every three months.

Although it is normally believed that an increase in price may lead to a loss of customers, 95 percent of the luxury brand companies interviewed by the WLA, including Louis Vuitton and Gucci, have shown a positive attitude, because they believe that higher prices signal greater exclusivity and help with the growth of the brand.

The luxury giants' confidence in the market has been boosted by sales in China. The Sweden-based tax reimbursement agent Global Refund Group recently released a report, showing that the total amount of tax-free products bought by Chinese tourists in France in 2010 totaled 650 million euros ($919 million) in 2010, far outstripping the second-most generous tourists, the Russians. The average consumption of Chinese tourists overseas had risen to 1,300 euros each in 2010 from 650 euros in 2005.

The WLA studied luxury brands sales in the major business areas in France, Italy and the United Kingdom over the 12 months between March 2010 and March 2011. They found that 65 percent of those purchases were made by Asian tourists, 75 percent of whom came from China.

What is even more stunning in the WLA's findings is that in 2010 Asian tourists in Europe bought luxury goods worth a total of $69 billion, $50 billion of which came from Chinese customers.

"The amount that Chinese customers contributed to the European luxury market in 2010 was four times that of the domestic market, making the Chinese the biggest buyers in terms of overseas luxury-product consumption," said Andy Kline, a special researcher with the WLA.

The organization has also discovered that the total consumption of luxury products by Chinese consumers - excluding private jets, yachts and limousines - amounted to as much as $10.7 billion last year, accounting for a quarter of the global market, and second only to Japan, which took up about 34 percent of the global market.

The WLA estimates that China will overtake Japan and produce the largest number of luxury-goods consumers in 2012.

China is galloping. By the end of May, the country had already taken 27 percent of the global luxury market, slightly lower than Japan's 29 percent.

The devastating earthquake and ensuing tsunami that hit Japan in March has greatly impaired both the purchasing power of Japanese consumers and the confidence of many luxury brands.

"Hermes Group, LVMH, PPR Group and the Richemont Group all held board meetings recently to adjust their plans for Japan," said Michael Ouyang, CEO of the WLA's China office.

"More than 70 percent of the brands will try to accelerate a shift in their development focus from Japan to China this year," he added.

The robust growth of the Chinese luxury market in the first five months of this year allowed the WLA to predict that China will contribute more than $14.6 billion to the global luxury-goods market in 2012, to become the global leader.

They have also predicted that the room for growth in markets such as the United States, Japan and Europe will be quite limited in the next three years in terms of luxury-goods consumption. Therefore, China will grow to become the hub of the luxury market.

This year will mark a milestone in the expansion of these international luxury brands, according to the WLA. As China is now home to almost two-thirds of these brands, smart company heads will work out better plans for China within two years. By the end of 2013, all the luxury brands will be found in China.

The industry giants have already probed the Chinese market and their next steps are clear: for first-tier brands, such as Louis Vuitton and Gucci, which have a longer history in China and stable foundations in first-tier Chinese cities, their next step will be expansion into second-tier cities. The 10 most hotly contested cities will include Ordos in the Inner Mongolia autonomous region,Taiyuan in Shanxi province, Tangshan in Hebei province, Hefei in Anhui province, and Qingdao in Shandong province.

Louis Vuitton, for instance, opened stores in 10 Chinese cities in 2005, but by the end of last year it had 36 stores in 29 cities, including second-tier cities such as Changsha, Xiamen, Wuxi and Wenzhou.

According to Harald Wester, global CEO of Maserati SpA, the company delivered 5,777 new automobiles to customers worldwide in 2010. Chinese customers accounted for 400 of the sales, making the country the fourth-largest global market for the Italian automaker.

In the first quarter of this year, Maserati sold some 142 cars in China, double the number of purchases during the same period last year. It is expected that China will become Maserati's second-largest market by the end of 2011.

The four new dealerships that Maserati is about to open in China are all in second- or third-tier cities, namely Wuhan, Wenzhou, Tianjin and Xiamen.

The luxury jeweler Cartier SA has even extended its reach to Yiwu, a county-level coastal city in the east of Zhejiang province that boasts of its vibrant free market.

Apart from penetrating deeper and further into the markets on the Chinese mainland, these luxury brands have also stretched into Hong Kong. The Italian fashion house Prada listed on the Hong Kong Stock Exchange on June 24. Meanwhile, the US-based leather goods company Coach Inc and the British luxury fashion house Burberry Group PLC have both expressed an interest in listing in Hong Kong.

Meanwhile, back at the headquarters of these luxury brands, more attention is being paid to Chinese consumers.

"More than 80 percent of the luxury stores in Europe are providing a Chinese translation service now. This service, specifically catering for Chinese consumers of luxury products, will make the brands even more attractive. And shopping overseas will grow into a habit in the future," said Ouyang.

The Chinese government has also noticed the ever-increasing purchasing power of Chinese consumers and the willingness of luxury brands to expand in the country.

The import tariff for luxury goods currently varies between 20 and 50 percent. But the good news for the brands is that the authorities are thinking of reducing those duties.

Yao Jian, a spokesman for China's Ministry of Commerce, said recently that import tariffs will be reduced in the near future, including those for luxury goods. It is estimated that imported cosmetics and perfumes will be the first goods to see a reduction in tariffs, by about 10 to 15 percent.

With the help of the Ministry of Commerce and the China Council for the Promotion of International Trade, the China Luxury Trade Commission was established in early June, indicating the government's interest in promoting the expansion of the luxury-goods market.

"With the establishment of this commission, the purchase of luxury goods will hopefully increase. It will also help to further internationalize the luxury industry in China," said Yang Xiaodong, the director of the China Luxury Trade Commission.