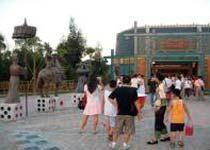 60 yuan for each person

The rich cake garden of Xiamen stimulates the most the happy folk activity in Xiamen, merge historical anecdote and the south of Fujian Province custom in an organic whole.
You can experience the unique rich cake activity of Xiamen personally, experience and get champions here Good luck one of first prize in a lottery; Can stroll on Xiucai s way, pick up doctorate s steps, climb champions to carry, experience richly Cakes rich that culture long historical; The ones that can also taste flavor of the south of Fujian Province Champion s dinner ,Watch the humorous play of the style of Xiamen of ground The rich cake comes from the palace in the Tang Dynasty game, dice play It is the embryonic form of the rich cake game, that was more than 1300 years ago. New year begins, in great joyous festival, Gong ZhongShi s daughter and eunuch, all add to the game ranks, arrive, open in the period of the yuan prevailing most. Emperor Xuanzong of the Tang Dynasty participates in too sometimes, happy together with the concubines. With the rise of imperial examination system, dice play Developing gradually becomes and places the examinees The high school The hope The champion office , the champion raises The game is quite popular in the examinees.
Beautiful legend among the people -Zheng Chenggong Reward with food and drink a soldier in the battle field More than 300 years ago, Zheng Chenggong regarded Xiamen as the base area, expelled and carried on one s shoulder or back and recovered Taiwan safely. To Mid-autumn Festival, soldier time thought relatives. The big brilliance of the rising sun of Zheng Chenggong s inferior officer, in order to comfort soldier s homesick feeling, through some schemes, have know cakes skillfully on the Mid-autumn Festival ,Let the soldiers admire the full moon, rich champion s cake . After Zheng Chenggong recovers Taiwan, rich cake The activity spreads in Xiamen and Taiwan, become the distinctive folk custom of area of the south of Fujian Province of Fujian. Local characteristic and culture value that the rich cake activity is with distinct it too, are listed in the second set of national-level non-material cultural heritage registers in February of 2008.