Textile Export to ASEAN Heading towards Full Recovery in 2010

Textile Export to ASEAN Heading towards Full Recovery in 2010

Under the FTA, the average tariff on goods from ASEAN countries to China is reduced from 9.8 percent to 0.1 percent. The six original ASEAN members -- Brunei, Indonesia, Malaysia, the Philippines, Singapore and Thailand -- slashed the average tariff on Chinese goods from 12.8 percent to 0.6 percent. The FTA is mutually beneficial. With full consideration of economic development levels and market capacities of both sides, the FTA will advance the regional economic integrity by eliminating barriers of trade and investment.

There are a lot of advantages for every country: China and the ASEAN states complement one another in many ways: On the one hand, China has easy access to the other countries. On the other hand, the existing ASEAN countries can import raw products from China at lower costs to be more competitive with other countries.

After global economic crisis, China was increasingly focusing more on ASEAN markets for growth. From Jan. to Dec. 2009, China's accumulated textile and garment export value to ASEAN amounted to $11.006 billion, which accounted for 6.42 percent of China s total textile and apparel export value, up 0.49% y/y. It is noted that the export growth rate of China's textile to ASEAN were 3.35%, 39.30% and 57.20% in Oct., Nov. and Dec. 2009 respectively. Vietnam, China's biggest textile market, imported $2.234 billion worth of Chinese textile in 2009, up 11.02 percent y/y.

Chart 1.The change of growth rate of China textile and apparel export to ASEAN in 2009 (single-month export value) 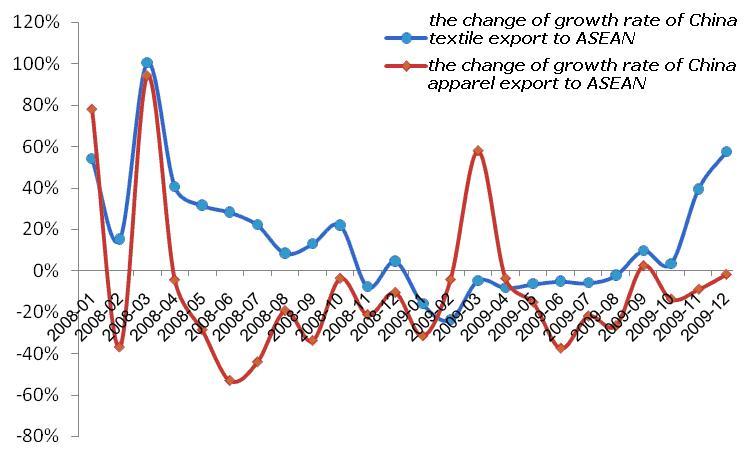 Thanks to swift government response -- including reduction of interest rates, decreasing bank reserve requirements and stimulus spending--Asian economies led the global recovery from the worst recession in decades. The Asian Development Bank (ADB) said the region's GDP would grow by 4.5 percent last year, a rate higher than many other parts of the world.

8% contraction; Singapore's economy fell 2.0% in 2009, better than the government's earlier forecast of a 2.1% contraction.

ASEAN is one of the most dynamic regions in the world. If ASEAN were a single economic entity, it would rank as the world's tenth largest economy, the third biggest market in the world in terms of population, the fifth largest trading bloc and the tenth in terms of FDI inflows. The China-ASEAN Free Trade Area, the world's largest free trade area of developing countries, covers a population of 1.

9 billion and accounts for about 4.5 trillion U.S. dollars in trade volume. China-ASEAN free trade agreement could result in huge growth in bilateral trade between China and ASEAN, especially since the demand from the United States and Europe has plummeted during the global financial crisis.

The global financial crisis has prompted Beijing to hedge the weakening U.S. dollar by encouraging the regionalization of the RMB as a settlement currency for trade and other current account transactions in Asia, and bypassing the use of the U.S. dollar. According to some estimates, the total trade between China and ASEAN members could reach $4.

5 trillion once the FTA is launched. The launch of CAFTA will provide momentum for broader regional growth and may facilitate a decoupling from the West, as the RMB plays a more prominent role in the regional economy. If the Chinese government could push RMB regionalization successfully, there would be a huge potential gain for the Chinese exporters. 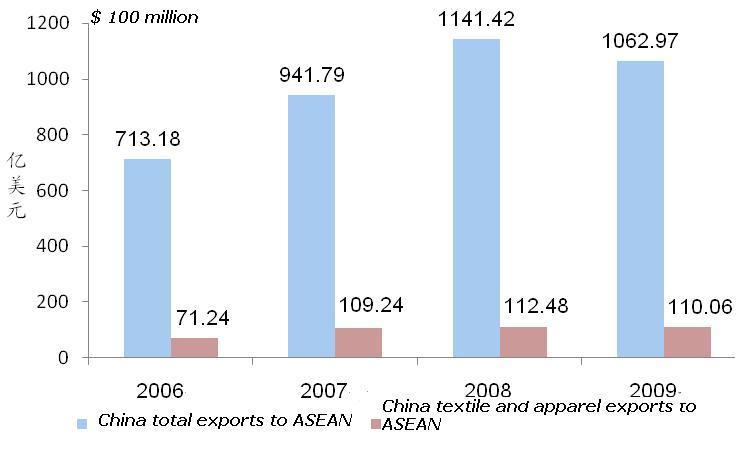 It is not contradictory for China to enjoy the convenience of regional economic integrity by eliminating barriers of trade and investment, while still suffering from vulnerabilities inside the ASEAN countries.

For example, Vietnam devalued its currency 3.4% against the U.S. dollar effective on Feb. 11 2010, the second time in less than three months it has downwardly adjusted the value of the dong, which affect the competitiveness of Chinese textile products and further exacerbate competition on market. Moreover, although the Thai economy is expected to continue growing with the support of global economic recovery, Bank of Thailand (BoT) predicted that the political uncertainties in the country remain a key risk factor.

The political uncertainty gripping the country could damage investor confidence.