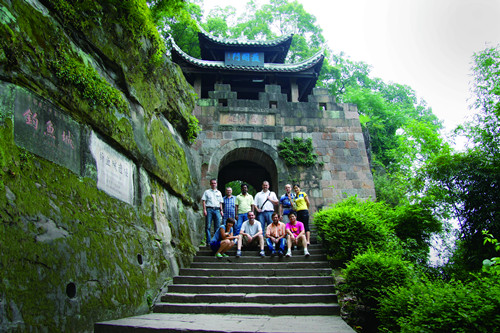 Chongqing, with beautiful mountains and rivers, is a famous destination for tourists. It has numerous natural scenic spots such as the Yangtze River Gorges, the Jialing, Wujiang and Daning rivers, mountains such as Jinfo, Simian and Jinyun, and lakes such as Changshou and Xiaonanhai, the mysterious Heavenly Caves and Earthly Chasms, and the Furong and Xueyu caves. It also has lots of relics such as the Longgupo cultural ruins, the Dazu cliffside sculptures, the Hechuan fishingtown, the Baiheliang underwater inscriptions, the Ghost City of Fengdu, the Shibao stockaded village, the Temple of Zhangfei, the ancient city of Baidi, the Shuangguitang Temple, the battlefield of War of Resistance Against Japanese Aggression, and the Revolutionary Martyrs Cemetery on Mount Gele.

The unique Diaojiaolou (house supported by wooden stakes above the ground), the shamanistic and folk dances of the Tujia nationality are said to be authentic performances of the ancient Ba people. Renowned historical figures such as Bamanzi, an ancient widow named Qing, Qin Liangyu, Zou Rong, Lu Zuofu, Zhao Shiyan, Yang Angong, Liu Bocheng, Nie Rongzhen, and several hundred others are all connected with Chongqing. The more than 170,000 Ba-Yu relics housed in the China Three Gorges Museum are witness to the brilliant civilization which has flourished in the Chongqing area since ancient times.

The main part of the city of Chongqing is surrounded by mountains, with the Yangtze and Jialing rivers running through. Light rail systems, cables and bridges cross the rivers. Standing at Yikeshu or Liangjiangting, two ideal viewing positions on the hills, one can get a panoramic view of the myriad of the mountain city when dusk falls.