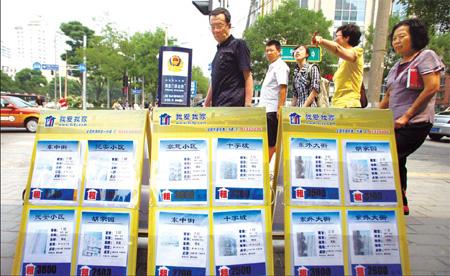 Rental prices in Beijing have been going up recently. [Zou Hong / China Daily]

Lease prices for middle- and high-end apartments and houses increased more than 20 percent over last year.

"The hike is due to the government's policy adjustment on the house purchasing market," he said.

"Since the home prices went up, more potential buyers thus to renting; it's the case with about 30 percent of our current clients."

Palm Springs, located south of Chaoyang Park, was built beginning in 2002. More than 40 percent of its residents are foreigners, according to Zhang.

"During the last several years only in 2009 did the prices not rise," he said.

"From my point of view it has risen to a certain extent and there isn't much room for more hikes."

Joanna Tan, director of Joanna Real Estate, said the lease prices of mid- to high-end properties have generally risen, with the "good properties" such as Central Park and Beijing Riviera enjoying a hike from 20 to more than 30 percent.

However, Tan, who has sold and leased homes to foreigners for more than 20 years, saw the reason more in the end of financial crisis.

"It has nothing to do with the policy adjustment on house purchasing. If it were, there would be more landlords renting their apartments. But that's not the situation, and so far the demand still exceeds the supply on the middle- and high-end leasing market," she said.

She expected prices will not ease off before summer ends.

The average cost to lease a two-bedroom apartment in Beijing reached 3,000 yuan in June, according to Homelink Real Estate, a Beijing based real estate company.