BEIJING: Boshiwa International Holding Ltd, a Chinese manufacturer of garments for children and teens, is preparing for a listing on the Hong Kong bourse this year, an industry source told China Daily on Monday.

"The company has submitted the application to the Hong Kong Exchange," said the source that requested anonymity. 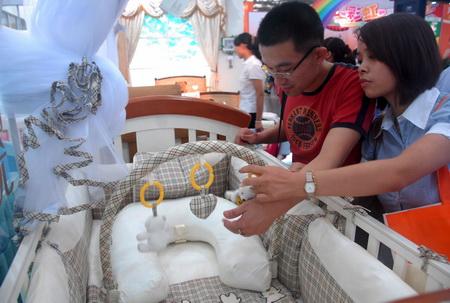 If everything moves as planned, Boshiwa will be the country's second garment producer for this sector to list in Hong Kong, following Fuzhou Topbi Fashion Corp, Ltd in 2008.

"Our products target customers from newborns to 16-years-old, and we will remain focused on this sector due to the huge market potential," said Zhong Zhengyong, president of Boshiwa International.

Established in 1996, the Shanghai-headquartered Boshiwa has achieved an annual growth rate of more than 50 percent in the past three years consecutively, becoming one of the largest kids and teens' garment manufacturers in the country.

Industry statistics show that China has 360 million individuals under age 16, and the number is growing by 20 million each year. However, there are only around 6,000 garments manufacturers catering to this age group in the country, accounting for less than 10 percent of all garment producers. And garment makers specializing in young people's clothing make up only six percent of all garments made in China, indicating there is huge room for growth.

According to a report by the Boston Consulting Group, the market value of China's baby industry alone - including food, garments, toys and related products - reached 130 billion yuan last year and will grow at an annual rate of 17 percent through 2012.

Such a huge market is also luring many international sportswear producers and other industries as well.

When Adidas and Nike reduced production of adult wear last year because of global economic recession, they boosted investments in the children's and youth garment sector.

Meanwhile, domestic sportswear manufacturers such as Li Ning, Anta and 361 have all launched their own children's lines too.

The market is also attracting new players like appliance maker Haier Group, for instance, which announced earlier this year they will launch more than 3,000 franchise stores to sell kids products.

Different from its rivals, Boshiwa mainly promotes its brands by joining with other world-renowned brands. The company just signed a deal with the NBA to launch NBA-branded children garments and accessories in China.

As planned, Boshiwa will design and develop 16 types of NBA-related children products. "We will also consider other types of cooperation with leading sportswear brands and other cartoon character apparel merchandisers," said Zhong.