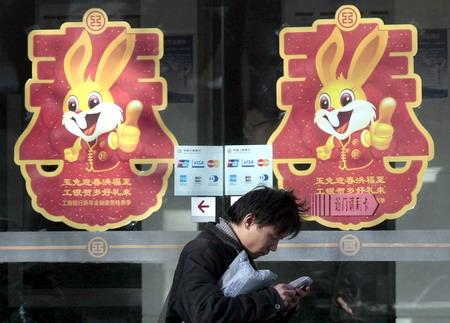 A Nanjing-based branch of Industrial and Commercial Bank of China is adorned with festive decorations for the upcoming Lunar New Year. [China Daily]

Chinese commercial banks earned unprecedented profits in 2010, and are projected to secure a profit growth rate as high as 20 percent this year, said officials and analysts.

Guo Tianyong, a professor with the Central University of Finance and Economics said the figure will certainly exceed 900 billion yuan and might even reach 1 trillion yuan.

The rapid growth in profits was mainly attributable to the expanding scale and rising difference between lending and deposit interest rates, said analysts.

It predicted the growth rate of banks' profits in 2011 may slow down to between 15 and 20 percent, mainly due to the country's tightening monetary stance and shrinking new yuan loans, said the report.

To tame inflation and stabilize economic growth, the Chinese government has put suppressing inflation at the top of its agenda for 2011 while shifting its monetary stance to "prudent" from "moderately easy", which analysts said means tighter policies.

Analysts predicted the amount of the new yuan loans would be reduced to around 7 trillion yuan this year from 7.5 trillion in 2010.

"The banks will raise lending interest rates to compensate for the negative effect brought by the declining credit scale. But as the government liberalizes deposit interest rates gradually, the interest margin may not be big enough to offset the shrinking credit," said Guo, predicting banks' profits will grow by 10 percent this year.

Although the growth rate will decline in 2011, it will still be a rapid clip, said the Bank of Communications. The Guotai Junan Securities predicted if the regulators won't require higher provisions for the banks, profits would even reach 21 percent.

It said the central government's moves to raise interest rates, banks' increasing bargaining capability, and assets and liabilities restructuring will jointly drive the net interest margin up in 2011.

The net interest margin will rise 12 to 18 basis points, or 6 to 8 percent year-on-year in 2011, said Industrial Securities.

On the other hand, fee income will grow steadily this year, as banks further optimize their revenue structure, said analysts.

Bank of Communications predicted net fee income of Chinese banks will grow at a rate of 30 percent, becoming a major contributor to rising profits.

Essence Securities expected 2011 profit growth of the banking industry will be around 17 percent, among which profits of the State-owned banks will increase by 16 percent, profits of the shareholding banks up by 20 percent, and that of the smaller city commercial banks will rise by as high as 28 percent as they are in the expansionary phase.

Although Chinese banks may not earn as much money as they used to, international investors should still be optimistic about their profit prospects, said Elaine Wong, managing director and head of Professional Services Asia-Pacific at Moody's Analytics.

"Despite the government soaking up excessive liquidity and planning to further tighten credit, new loans will still grow rapidly in the next year," she said.