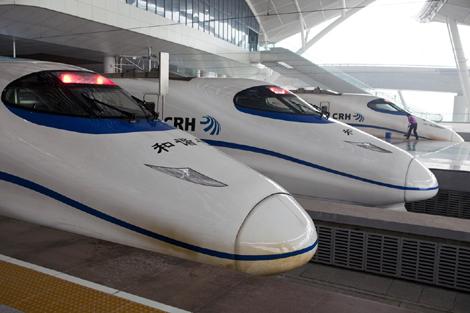 China Railway High-Speed trains at the platform in the new Wuhan Railway Station in Wuhan. Bank of China is likely to invest some 6.6 billion yuan in Beijing-Shanghai High-Speed Railway Corp, the operator of the 1,318 km express rail link being built between the country's most affluent cities. [Bloomberg]

BEIJING - Bank of China (BOC) is likely to invest some 6.6 billion yuan in Beijing-Shanghai High-Speed Railway Corp, the operator of the 1,318 km express rail link being built between the country's most affluent cities, people familiar with the matter said.

The nation's third largest lender by market value plans to buy 6 billion shares from China Railway Investment Corp (CRIC), the largest shareholder of the Beijing-Shanghai high-speed railway operator, at about 1.1 yuan per share, the sources, who declined to be named, told China Daily.

CRIC, currently holding 56.2 percent of Beijing-Shanghai High-Speed Railway Corp, said in February that it intended to shed a 4.5 percent stake to raise about 6 billion yuan for the purpose of funding other rail construction projects.

The deal has won the approval from the banking regulator and will be completed through BOC's Hong Kong-based investment arm - Bank of China Group Investment Ltd, the sources said, adding that BOC will file the announcement of the deal to the stock exchange on March 30.

With an eye on the stable and lucrative returns from railway investments thanks to China's monopolized state-run railway operation, the nation's top lenders, including Industrial and Commercial Bank of China, China Construction Bank and Bank of China expressed a keen interest in investing in Beijing-Shanghai High-Speed Railway Corp prior to its establishment at the end of 2007. However, the banking regulator banned a planned share acquisition at the time.

She Minhua, a Shanghai-based banking analyst at Haitong Securities, said that investing in the high-profile railway operator would bring decent returns to BOC thanks to the robust and sustainable growth potential of China's railway industry.

However, She said he did not believe it was a long-term business development plan because it was very different from the lender's main financial business. "Chinese banks are currently in dire need of capital to fund their main business expansion. Using hard-earned public funds to invest in non-core businesses might not be a reasonable choice," he said.

Bank of China said in February that it would issue 40 billion yuan convertible bonds and might issue up to 20 percent of its existing H shares in Hong Kong to bolster its strained balance sheets following a record lending book expansion of more than 50 percent last year.

Railway construction in China was largely funded by bonds issued by the Ministry of Railway and national funds. Ping An Asset Management Ltd and the national social security fund respectively owned 13.9 percent and 8.7 percent of the Beijing-Shanghai High-Speed Railway Corp as the second and third largest shareholders.

Under the country's frantic railway boom, especially pushed by the giant stimulus package last year, the Ministry of Railways is mulling whether to expand its capital raising avenues to fund railway projects nationwide.

Sources indicated earlier this month that the Beijing-Shanghai High-Speed Railway Corp was applying for top policymakers' approval on its initial public offering, which could raise up to 50 billion yuan to fund the construction.

Work on the high-speed railway between Beijing and Shanghai has a planned investment of 220.9 billion yuan and is scheduled to be operational by 2012. So far, nearly 122.4 billion yuan has been invested in the project.