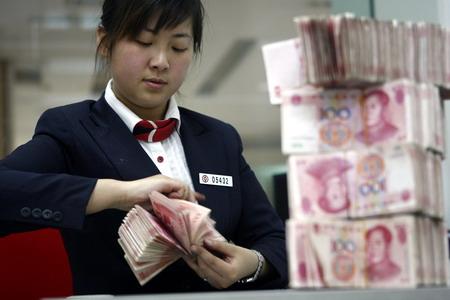 A Bank of China employee counting bank notes at a branch in Suining, Sichuan province. The nation's big lenders are likely to raise around $40 billion from the mainland and Hong Kong bourses this year. [China Daily]

BEIJING: The plan by the nation's big lenders to raise over $40 billion, jointly from the Hong Kong and mainland stock markets, this year has prompted its majority shareholder Central Huijin to seek a cash injection from the government, people familiar with the matter said on Wednesday.

Central Huijin, the domestic investment arm of the nation's sovereign wealth fund, China Investment Corp, is seeking a capital injection of between $15 billion and $50 billion, in an effort to boost its capital base and prepare itself for the impending public offering of Chinese lenders, sources close to the sovereign fund said.

As the parent of the country's three big lenders - Industrial and Commercial Bank of China, China Construction Bank and Bank of China (BOC) - Central Huijin will participate in the share sales, sources said.

In response to the government call to shore up the slowing economy amid the financial crisis last year, Chinese banks advanced a record 9.59 trillion yuan in new loans. That in turn, strained the balance sheets of most lenders and prompted them to look for capital replenishment.

With the government setting a credit target of 7.5 trillion yuan this year, sources said the major banks might each expand credit by around 17 percent this year. This would mean that the big four listed lenders would together raise around $40 billion from the mainland and Hong Kong bourses.

Bank of China, the most aggressive among Chinese lenders in advancing loans last year, was the first off the blocks with its plans. With its credit book expanding at over 50 percent last year, the bank is in dire need of capital. Its capital adequacy ratio, a key measure of financial health, dropped to 11.14 percent by the end of 2009, barely above the statutory requirement of 11 percent.

The Beijing-based lender said it has got clearance from shareholders to float 20 percent of its existing shares and as much as 40 billion yuan worth of six-year convertible bonds in Shanghai.

Xiao Gang, chairman of the bank, said the lender was still working on its H-share plan and would not raise funds from the mainland stock market after the 40 billion yuan convertible bonds issue.

Bank of Communications, the nation's fourth largest lender by market value, said earlier that it was planning a 42 billion yuan rights issue to shore up its strained balance sheet, in what is China's second largest follow-on offering after China Mobile.

Other major lenders like Industrial and Commercial Bank of China and China Construction Bank are also likely to follow BOC's footsteps later this year, sources said.

But with concerns mounting that such huge share sales would drain market liquidity in the mainland, the lenders are exploring other avenues, said sources.

Indications are that the lenders would opt for convertible bond issues and private placements.

Some analysts, however, opine that the fund-raising plan would have a limited impact on the mainland market, as regulators would take these things into consideration before allowing the share sales.