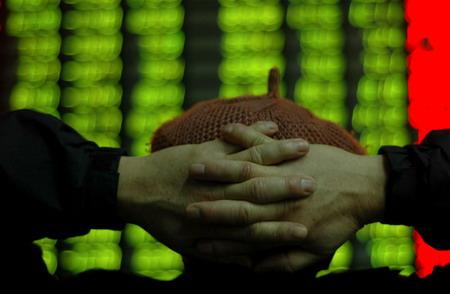 An investor monitors stocks at a brokerage in Shanghai. [China Daily]

SINGAPORE - Investors cut their holdings of Chinese equities in January as the government stepped up efforts to cool asset bubbles, according to EPFR Global.

China's weighting in global and Pacific funds also declined, according to the statement.

China's stocks are the worst performers in Asia this year after the central bank twice ordered banks to set aside more funds as reserves and officials stepped up curbs on property speculation.

China stock funds have posted net outflows in nine of the first 11 weeks of the year even as emerging-market funds continued to draw fresh money, the Cambridge, Massachusetts-based researcher said in a March 18 statement.

Indonesia's weighting within Asian equity funds rose to a 12-year high, EPFR said. Data for the month ended Jan 31 was released to clients on Feb 23, the company said.

Funds tracking global emerging stock markets also boosted their investments in developing Europe to a 15-month high and raised their holdings of the Middle East and Africa from a 12- year low set in December, EPFR said.

Turkey was the fund group's biggest "overweight" for a sixth straight month, followed by Russia, Indonesia, Thailand and Mexico, according to the statement.

Six of the eight major equity fund groups tracked by EPFR, including those investing in Asia and global emerging market stocks, also increased their cash weightings in January.