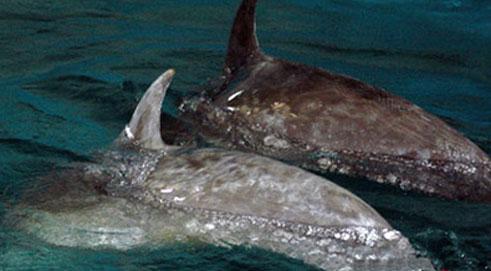 They are the first batch of living marine animals entering Hunan after the nuclear crisis unfolding in Fukushima, the northeast of Japan.

According to local Entry-Exit Inspection and Quarantine Bureau, dolphins and conveyances were not affected by nuclear pollution, and their health condition was basically normal.

The conclusion was based on a 70-minute-long inspection, including an inspection of radioactivity and regular inspection and sterilization.

Two hours later, the "guests" were delivered to Changsha Underwater World and settled down in two independent "dormitories". They adapted to the new environment quite soon and were swimming there with ease.

About two to four years old, two females and two males will meet with visitors after 30-day quarantine. And the earliest date for their performance is expected to be six months later.