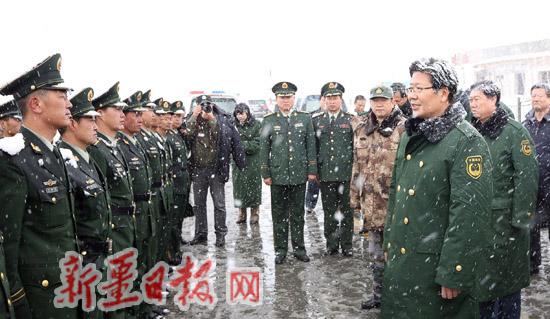 From Sep. 6th to 8th, Zhang Chunxian, secretary of CPC XJ Committee made a fieldwork in Kashgar Prefecture. He went deep down to Tashkurgan County, Shufu County, Kashgar City and Shule County to learn the practical situation of local places.
Tashkurgan Tajik Autonomous County sees heavy snow these days September. However, Zhang Chunxian and his party overcame the oxygen deficit in arctic-alpine area, and visited the stationed officers and soldiers in Kanjirap frontier company and the frontier inspection station at an altitude of 5100 meters.

"Safeguarding our frontier is our sacred mission. Working in such a special place, you shoulder a colossal responsibility and glorious mission."

Tashkurgan County is bounded by Pakistan, Afghanistan and Tajikistan, with a border line of 888 kilometers. The county is also the one with longest border line and bounded by most countries in China. Departing from Kanjirap, Zhang Chunxian went to Karasu Port, the only land port on the border of China and Tajikistan. Zhang Chunxian said that, Kashgar should accelerate the port construction relying on its location advantage, give priority to the infrastructure construction at the port, improve the customs clearance environment and cargo handling capacity.

At Langan Village of Tiznaf Township, Zhang Chunxian felt gratified after learning that the villagers have moved into new houses under the help of the party and government, and all the villagers are striving for more income. He wishes them a better life.

Zhang Chunxian also made inspection in factories, on resettlement projects and bilingual kindergartens. He learned about people's livelihood improvement and educational development of the local places.

While talking with officials of Kashgar Prefecture, Zhang Chunxian required that, the government should build Kashgar into trade center and commodity distribution base towards central Asia and south Asia. At the same time, the prefecture should enhance special economic zone development and exert the function of Kashgar, Central & South Asia Commodity Fair.

Moreover, the prefecture should make policies for key industries and pay great attention to talents introduction. People's livelihood projects should be promoted with full efforts, such as projects of enriching herdsmen and resettlement, the natural gas project and reconstruction project of low-conditioned areas.

Zhang Chunxian also stressed that, cadres at all levels should care people and pay attention to innovation. They are also required to deal with concrete matters in practical work, so that they will do their bit to the leapfrog development and lasting stability of Xinjiang.