Academic exchange between the Japanese Sapporo Gakuin University and BUA

Academic exchange between the Japanese Sapporo Gakuin University and BUA

In the morning of September 25th, the friendly delegation made of the professors from Sapporo Gakuin University (SGU) gave a respect visit to our university, and they had an academic exchange with the teachers from Humanity and Social Department and the Economic Management Department.

Representing the university, vice president Du Xiaolin gave a warm reception to the foreign guests. He firstly introduced the development of our university in recent years to the four professors of the delegation and carefully inquired the teaching and foreign exchange conditions of South dean of economic management department, He Zhongwei, and the secretary of humanity and social science department, Li Gang separately introduced the basic conditions of their departments in detail, and they well answered and explained the relevant questions proposed by the delegation. Representing the economic management department, professors Li Xingjia and Deng Rong introduced the positive results and challenges existing in the fields of urban modern agriculture education and scientific research. The introduction given by the professors inspired the interests of the delegation. The atmosphere of the conversation was relax and warm.

The dean of the international intercourse center (foreign affairs office) of Sapporo Gakuin University, professor Sasaki introduced the general situation of SGU as the representative of the Japanese delegation, and he also explain the cooperation and intercourse held with other Chinese universities in detail. Thereafter, he presented the freshly made DVD video materials on SGU to the leaders of our university. And to the humanity and social science department and economic management depart he respectively gifted the written introduction materials, and expressed his wishes for further cooperation and intercourse with our university. Representing the economic college of SGU, the president of the delegation introduced the teaching and scientific research conditions of the college, and also carried out a discussion on the discipline problems on Marxist political economy with the teachers from humanity and social science department. The former dean of postgraduate department of SGU, professor from the business college Er Yumin introduced the teaching and scientific research conditions of BusinessCollege. Also she gave a special introduction on their characteristic research direction--" the development of regional society and economy . The deputy dean of economic management department Liu Fang, Yangjing, Xia Long and the associate professors from humanity and social science department Niu Bianxiu joined the academic exchange with the professor from the economic college of SGU, Jing Weiqiu, and presented the new published academic works to the delegation. Also the dean of humanity and social science department Hua Yuwu, and its deputy dean Tong Zhanjun participated in the academic exchange. After the meeting, both the guest and host gifted their mementos and had photos as a souvenir. 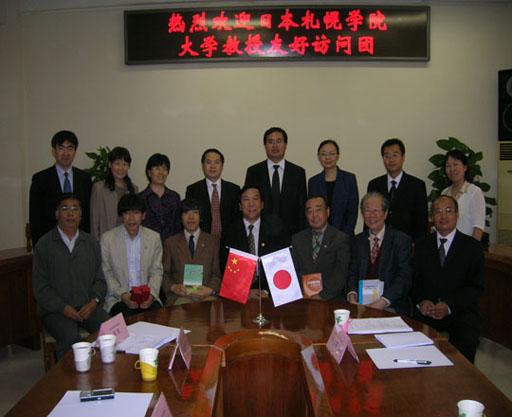 Located in the Sapporo, Hokaido, Japan, SapporoGakuinUniversity is a university with five thousand students and six second grad colleges. In its graduate school there are the master courses on regional society and economic development, clinical psychology and laws. Therefore, it is a university that takes humanity and social science as its features.