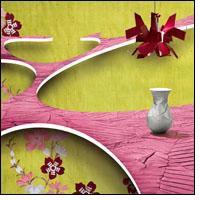 Intertextile Shanghai Home Textiles recently confirmed a brand new zone for European suppliers at the three-day event, to be held from 24 26 August 2010 at the Shanghai New International Expo Centre, China.
Located in Hall W1, this special zone will feature leading suppliers from Belgium, Germany, Denmark, Italy, Spain, Sweden and the Netherlands such as Ekelund, Marutx, Morphrow, Rafael Catala and Tex Athenea. They will showcase a range of luxurious home textile products from curtains to upholstery fabrics.
First time exhibitor from Sweden, Ekelund is enthusiastic about its participation in the new zone. It is a good idea to organise the European zone and we are glad to be part of it. Another important reason for us to join the 2010 show is the increasing purchasing power of the Chinese consumers. We expect to meet with distributors and wholesalers in this region at the fair, said Mr Kent Vikingsson, Vice President for the company.
Returning exhibitor Mr Xavier Girones of Athenea from Spain agreed with Mr Vikingsson about organising an European zone. He further added: Our experience last year was positive. Even after the show, we were very busy following-up the business enquiries received on-site. We hope to expand our customer database and sales in China as well as other markets.
In addition to this special zone, Pakistan, Taiwan and Turkey will organise country and region pavilions in the fair.
Chinese market demand grows for wall covering
China s rapid urbanisation and relatively low consumption rate of wallpaper (0.3 square metres per capita in China as compared to 5.4 square metres per capita in Japan) create a marketplace rich with business opportunities for wall covering suppliers.
Observing these trends, leading wallpaper manufacturers Zambatti, new exhibitor from Italy and P+W, a returning exhibitor from Korea have both confirmed their attendance to the 2010 event. There is a huge space for growth in the Chinese market as consumers now have higher demand in home decoration items. We believe this fair can help us expand our business in this region, commented Ms Zhai Lu Lu from Zambatti.
This time we will bring a vast range of wall coverings in different patterns and materials. We hope to meet with more quality buyers at the 2010 show, said Mr Junehee Shim, Manager for P+W.
Intertextile Shanghai Home Textiles 2010 is organised by Messe Frankfurt (HK) Ltd.; the Sub-Council of Textile Industry, CCPIT; and China Home Textile Association (CHTA).