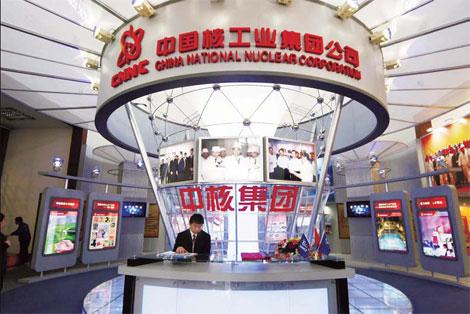 The logo of China National Nuclear Corporation at an international industry exhibition in Beijing. The company said the crisis in Japan should not cause China to back off from its planned nuclear development. [Photo: China Daily]

"China should not change its development plan in the nuclear power sector," said Pan Ziqiang, director of the Science and Technology Commission at CNNC. He added that nuclear power is a major and reliable source for China to meet its energy demands, and one which is environmentally friendly.

"China has a sound record in nuclear safety," Pan said. "We have never had a nuclear incident beyond level two."

According to the International Atomic Energy Agency's (IAEA) nuclear event scale of one to seven, level two means significant failures in safety provision but with no actual consequences.

Japan raised the crisis level at the Fukushima Daiichi plant to five, similar to the level at Three Mile Island in the United States in 1979. Level five is defined as a limited release of radioactive material likely to require implementation of some planned countermeasures and to cause deaths from radiation leakage.

"China will not change its policy in developing the nuclear power industry," Sun Qin, president of CNNC, said during a visit to Qinshan nuclear power plant in Haiyan county in Zhejiang province, China's first domestically developed nuclear facility, on Thursday.

On March 19, China's National Nuclear Safety Administration ordered existing facilities to begin safety checks in the wake of the Japanese incident. The checks included location adaptability to external incidents such as floods, earthquakes or any extreme natural disasters as well as the reliability of the emergency power supply, which are all the possible factors that might cause an event similar to that in Japan.

Despite this, the country is likely to start building a nuclear power plant next month in Shandong province, using fourth-generation technology, according to Huaneng Nuclear Power Development Co, the project's developer.

China currently has six nuclear power plants in operation, located along the country's eastern and southern coasts. The country is also considering building several inland nuclear stations in provinces such as Hubei, Hunan, Jiangxi, and Jilin, in addition to Chongqing municipality.

"It is necessary for China to build inland nuclear stations, but they should all be subject to stricter standards for measuring radiation," said Pan.

The use of third-generation technology, such as Westinghouse's AP1000 reactor and Areva's EPR reactor, is gaining ground commercially.

China is currently building 28 new reactors, six of which will use third-generation technology.