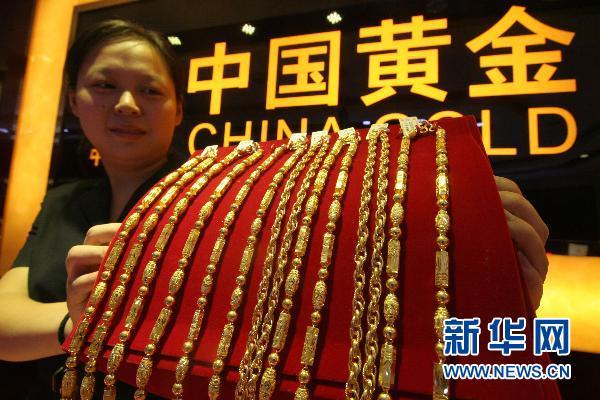 JPMorgan China CEO Fang Fang predicted Sunday that the price of gold will rise to $2,000 per ounce at the end of this year. [Photo/Xinhua]

JPMorgan China CEO Fang Fang predicted Sunday that the price of gold will rise to $2,000 per ounce at the end of this year and continue gaining, reaching $2,500 in 2012.

"U.S. economic growth in the second quarter was just around 1 percent, far below previous predictions of 2.5 to 3 percent. And EU countries are still struggling with their debt crisis. Economic growth will continue slowing down over the next 6 to 12 months," he said.

Fang predicted that the stock market will see greater volatility with a potential rebound in the fourth quarter, but the global economic downturn would probably trigger a selloff in stocks in 2012.

Fang said the upcoming U.S. presidential election will also affect markets. "Obama is sure to push out a series of economic stimulus plans to win support for his second term," he said. "So a loose monetary policy is a must for Obama, which will lead to further depreciation of the dollar, pushing up the price of commodities prices."

"Although higher prices for commodities such as oil and steel will suppress demand and put counter pressure on rising prices, the gold and soft commodities like soybeans and wheat are sure to rise," he said.

"Gold is not an industrial raw material, so higher price will not lead to weaker demand. As an investment tool to avoid U.S. dollar devaluation, the price of gold will continue to rise," said Fang.