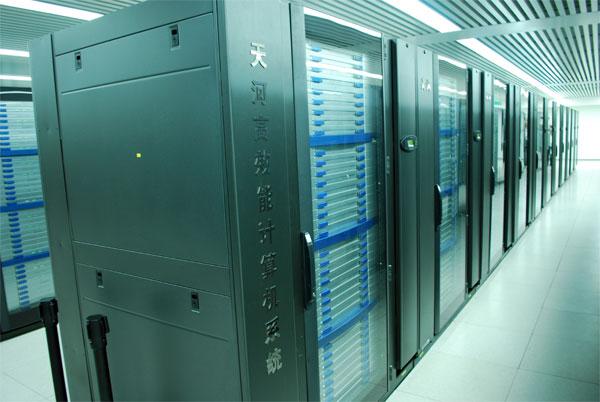 Tianjin is home to the world's second fastest supercomputer, Tianhe-1A. It is capable of 2.5 petaflops, meaning it can perform 2.5 quadrillion operations per second, or as many calculations per hour as the entire population of China 1.3 billion people working non-stop for 340 years.

Hewlett-Packard Co., the world's biggest seller of desktop and laptop computers by shipment volume, has its head in the clouds.

Struggling to maintain growth as tablets and smartphones have taken the wind out of PC sales, the pioneering Silicon Valley firm has said it is considering spinning off its US$41-billion personal computing business, abandoning its Palm smartphones and TouchPad tablet computers and remaking itself as a supplier of corporate software and technology services.

At the heart of the strategy lies aggressive expansion into the China market, where HP recently opened the doors on a 3,000-square-meter cloud computing center in the port city of Tianjin and announced plans for a research institute in Beijing.

"China, with its significant infrastructure investments, exploding digital content and minimal legacy IT systems, is primed to lead the world in cloud computing innovations," Apotheker said.

The battle for the Chinese cloud could yield significant spoils. According to market research firm IDC, the cloud computing market in China is set to reach US$1 billion by 2014, compared to US$320 million in 2010.

Meanwhile, Tianjin has positioned itself at the center of the country's growing cloud infrastructure.

Across the street, China's biggest internet company, Tencent Holdings, is building Asia's largest data storage and processing service center. When completed, the facility will hold 200,000 servers providing computing and storage for the 300 million registered users of its instant messenger, games and other Web-based services.

Favorable government policies, ample infrastructure and a synergistic business environment have driven rapid economic growth in the Binhai development area, where the firms have made their home.

The Binhai area economy expanded by 23.6 percent in the first half of this year to 280.695 billion yuan, compared to 16.6 percent for Tianjin and 9.6 percent for China as a whole. The blazing pace of regional development is due in part to meticulous economic planning by the area government, which is involved in every major economic deal and new enterprise that moves into the district.

But the area's appeal has also gotten a boost from quality IT infrastructure and the reputation of companies located there. According to a local government report, 109 Fortune 500 companies have invested in the area, including both well-known multinationals such as IBM, GlaxoSmithKline, Motorola, and Toyota as well as state-owned Chinese behemoths such as Sinopec, COFCO and China Life.

These big names draw business partners to locate nearby. In 2009, Xi'an Aircraft Industry Company opened a plant in Binhai after agreeing a deal with Airbus to finish and test wings destined for its A320 aircrafts, which it assembles at an area plant. Just three minutes from the Airbus factory, the new facility gave XAC convenient access to an important client. It also gave a boost to the local economy.

Area businesses represent a wide variety of sectors, from petrochemical firms such as PetroChina to food companies such as Nestle. But most find some way to take advantage of the area's vast computing power.

The National Animation Industry Park located in Binhai to take advantage of the area's cloud graphics processing center, which uses Tianhe-1A computing power to cut the time it takes to render a film from six months down to two hours.

As more firms choose to move into the region, the government has led a massive wave of real estate development and infrastructure investment. Dust and glittering office towers fill the sky in the Binhai Central Business District, a 37.6 square-kilometer construction site that will soon host some of the area's priciest real estate.

When those structures are completed and begin to seek tenants, their success or failure in filling their space will be a sign. Will the sky return to blue and buildings remain empty as the area's boom yields to a painful economic hangover? Or will the carefully planned Binhai experiment succeed, proving a new technology-based development model can work in China?