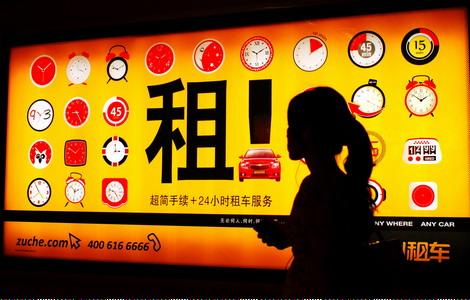 Air tickets are too expensive, trains aren't always safe, cabbies are on strike and car purchases are still limited. For bank clerk Lian Ping, it seemed as if all travel options had run out for her birthday trip from Beijing to Shandong province.

"It wasn't until a few days ago that I realized with my driver's license I could just rent a car and drive there," Lian said on Friday, four days before her 29th birthday. "The thought never crossed my mind before. I didn't even know people offered auto rental services here."

She decided to rent a Dongfeng Citroen for $15 a day and drive to Qingdao on Monday. The total cost, at $60, was only slightly more than if she took a train, Lian said. "It'd be more fun to drive."

By 2015, China's car rental market is expected to hit 400,000 vehicles and produce $2.8 billion in annual revenue, according to the China Taxicab and Livery Association. Consulting firm Roland Berger put that estimate at $5.9 billion.

"It's like real estate. In the end, the volume of rentals will definitely surpass sales," said Zhang Ruiping, chairman and CEO of Shanghai-based eHi Car Service, a major player in the market.

Once known as the bicycle kingdom, China turned into one of the world's largest automobile consumers in just a matter of years. Its civilian automobiles soared from 31.6 million in 2005 to 91 million last year. That number is expected to hit 200 million by 2020, said Wang Fuchang, deputy director of the equipment industry department in the Ministry of Industry and Information Technology.

As private auto purchases slow, car rental companies and advocates have picked up a 2009 government work report by Premier Wen Jiabao - which stated, for the first time, that the administration would "facilitate the development" of the car rental market - as a green light from the top.

In this growing, fragile and loosely regulated sector, companies are fighting for market control.

The biggest winner thus far appears to be Beijing-based China Auto Rental, the industry's No 2 player behind eHi until last summer, when it had about 6,000 cars in 28 cities. The tables have now turned, and China Auto Rental is operating in 58 cities, boasts a fleet of 22,000 and aims to almost double that figure by year-end.

The company acquired two of its major competitors in October and April for a total of $14 million.

Inside sources say it has also been negotiating to buy out the industry's third-largest player, TopOne Car Rental in Shenzhen, the industrial powerhouse in the south's Guangdong province. TopOne's chairman, He Weijun, said he has "never heard of the plan".

In late July, China Auto Rental expanded into eHi's turf by opening a 24-hour store in the heart of Shanghai. But its ambitions are much higher.

Lu Zhengyao, the company's chairman and CEO, said previously at a news briefing that increasing the size of the corporation was a priority over the next three years. When asked about the financial sustainability of its expansion, China Auto Rental's vice-president and regional manager in Shanghai, Hu Haibin, said: "We try not to lose money."

The market is highly fragmented. However, as China Auto Rental deepens its dominance in the sector, it is seeking to "become one of the largest car purchasers and, in turn, a stakeholder that has an influence in the global auto industry", said its vice-president, Yang Yanying.

One of the auto rental industry's primary features, He of TopOne said, is oligopoly, in which a few players individually affect the market but don't control it.

"It's a capital-intensive business," He said. "Lots of capital is required. The more money is involved in a sector, the more an oligopoly or monopoly is needed. Additionally, industry participants often operate in chains, which necessitate sophisticated management capabilities.

"Money and management - these are fairly high entry barriers. It's not a business where two or three people with 10-20 million yuan can just make things happen. That's impossible," He said.

Most of the industry's big names have plans to have their stocks listed in the United States. China Auto Rental has made an open agenda to be listed in two to three years. Cheyou Auto Leasing, Haina's primary shareholder in Zhejiang, expects to do so before 2013.

Meanwhile, Bloomberg reported in March that eHi might seek its initial public offering in New York as early as this year. When approached by China Daily, however, company chairman Zhang said he has no "definite timetable".

"This (getting listed) would be a positive influence to the industry. It'd make the business more regulated and rational," Zhang said.

China's auto rental companies flourished in 2006 and 2007 when the two top global players, Hertz International and Avis, failed to adapt their stores to the Chinese business environment and, as a result, largely suspended their business in the country.

Frozen credit markets, recessions and US automaker bankruptcies since 2008 coincided with a boom in China's own car rental sector. And as market conditions improved, foreign capital started to return to China.

"I see the participation of foreign capital as an inevitable trend. China's auto rental chains would not have developed at all without foreign capital to begin with," said TopOne's He.

China's auto rental industry is destined to boom with more people willing to spend on travel and with rising living standards, urbanization rates and costs of owning and driving a car, according to a 2010 study by Sinotrust, a leading auto industry consulting firm.

But the promises of growth are accompanied by an array of problems. At the end of last year, about 80 percent of China's 5,000 registered auto rental companies each had fewer than 50 cars. More than half of all companies were based in Beijing, Shanghai, Shenzhen or Guangdong's capital, Guangzhou.

In the absence of nationwide regulation, many small companies tend to rent private cars for their business and manage to avoid administrative penalty.

Xinhua attributed the lack of supervision to the abolition of temporary regulations on auto rental in late 2007 - new ones have yet to be drafted - a move that coincided with the start of the industry's rapid growth.

"The regulations are not in their place, or at least they're lagging far behind the sector's development," He said.

"Sometimes practitioners of the industry are riding in the gray area," eHi's Zhang said, "and the entire sector has no regulation to follow and be protected by."