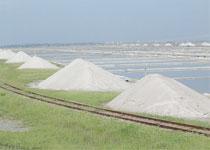 The sea saltern of warbler s song lies in the southwest seashore of Le Dong, it is the largest sea saltern of Hainan Island, it is leading too in South China.
Come to the sea saltern of warbler s song, that is mirrored the eyes of people is the silver sea that looks into a distance of no boundary at first. Here, the channel is vertical-horizontal and whole and right in order, silver of salt pan of well well is handed in sparklingly, it is crossed that the high-pressure electric wire is high up in the air, pool of pump house of water spreads all over the place, make salt machinery to rotate and thunder, present a and produce the busy scene everywhere.
The saltern builds it among sea mountain, the unbroken hills and mountains of the spike mountain range have blocked the sexual intercourse of typhoon from the North, enable here the sun is high in the sky all the year round, sufficient mere heat carries on the production of salt industry. In addition sea water of here high in salt degree content, enable, bring up the gifted working condition like this.
Visit saltern make salt to be very interesting, at the rising tide, sea water flow into, store the intersection of water and lake receiving the intersection of tide and the intersection of mouth and floodgate, through the pumping station, flow through and evaporate the pool for the first time and middle and advancedly again, the sea water density rises step by step. Have become brine that people spoke usually. The brine enters the crystalline district, just in saturation crystallization there. One vehicles of machine of salt charged busy, charge salt every afternoon, shovel, spend by a lot of white salt behind the machine, the rotatory blade in front of plane, mash the salt rapidly, the salt one is brought into the getting machine storehouse through conveying automatically, transport to the side of pool, pile the small silver mountains in succession. These high-quality salt, is transported to home and abroad continuously through more than ten trains one of place.
The sea saltern of warbler s song built in 1958, the whole area is 3793 hectares, 250,000 tons of annual production capacity, produced 300,000 tons per year at most. The mechanized intensity reaches 69%. The main products have crude salt, dry the thin salt in the sun, dry the high-quality salt, powder in the sun and wash the refined salt etc.. Among them dried the high-quality salt in the sun and won ministerial superior product title of light industry in 1988, 1992 honour of crude salt loved and respected the systematic first prize of salt of province. The past two years, all-round to change operating mechanism, develop economy synthetically, invest and build and produce 300 tons of plain factories of Australia per year, produce 300 the intersection of chlorine and the intersection of magnesium and workshop per year, produce 2000 spiral the intersection of algae and factory per year, pool, produce per year, divine plain factory by 500 natural the intersection of moustache and Luo. Develop the tertiary industry actively at the same time, has already founded a dozen companies, has incorporated worker, trader, trade, travelling, real estate into an organic whole, open up the salt, chemical industry, three broad roads developed synchronously of diversified economy.
The sea of warbler s song is besides abounding with salt, it is Hainan Island that has shouldered the fishery production base which has won the name for a long time too. With the rapid development of salt, fish production, the improvement day by day of the people s lives, impel here to become more beautiful and richly endowed. In salt industry workers and the local fisherman s living quarters and gentle district, looking can have dormitory building of the modern architectural style, resident s house, middle and primary schools hospital, post and telecommunications office, bank, store, entertaining the secret, theatre, dancing hall, recreation center,etc. are both as because answer, its colorful architectural style, the novel model has added life and good looks to warbler s sea of a song. The seashore, the sandy beach extends 5 kilometers gentlely, sandy and soft in vain. Have blocked the wind blowing like the protective screen that is had borning in the rock reef in the north, mountain ridge, wave that bring, enable crescent bay here, surface of water such as mirror, it is the southwest seashore tourist attraction of Hainan Island.