The river of the ancient seedling travels Western Hunan of China

The river of the ancient seedling travels Western Hunan of China 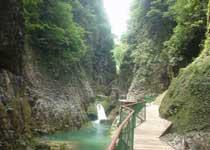 11 yuan (include one yuan insurance premium)

Take it to the minibus of Huayuan from Jishou railway station, fare is 10 yuan, about two hours can come. In addition, the bus for Yongshun, Longshan, Baojing passes Huayuan. Reach Huayuan county town, take the Taxi on the west door to the ancient seedling river quay, it is about 10 yuans that the single trip charters the fare and uses, can arrive in 20 minutes. Reach the quay, need to take the ferryboat and reach the gate of scenic spot, single fare is 3 yuan, six or seven minutes can come.

The ancient river of Miao is a mother river of the people of the Miao nationality, lie in Huayuan (yuan) of place of more than 70 kilometers in the north of Jishou County. Inhabit 200,000 seedling afterbirth by the river of the ancient seedling, multiply and live here in lots and lots of years.
The mountain peak of two sides in the river of the ancient seedling stands towering, move ahead in the depths of scenic spot of plank way of escalator built along the hill-side of ring, the scenery of No. one is very unique, there are plain boiled water rivers, the male lion meets driving , Chi patrols the boundary particularly Until whether the intersection of troops from heaven and heaven , book from heaven of ten thousand rolls And melt dangerously and beautifully in beauty spots such as one suits of seven ladders of rock waterfall,etc.,
Ancient the intersection of Miao and river once rename as the brother river for a time In order to carry forward national unity) ,But the local prefers this name of the river of the ancient seedling, because is imprinting a phase of ancient history first of nationality inside. The seedling afterbirth does not have one s own characters, but is bearing one s own history and culture with song rumor. In the seedling folk song ballad, it was them ahead of the grandfather Chi particularly that the song was sung most. Chi is respectfullied call the god of war by his descendant particularly, in the play particularly in local Chi, two emperors of brave god of war and Yan-Huang chase the deer on the Central Plains-try to seize control of the empire, proud despite loss. The river of the ancient seedling has legendary stories, there is dangerous and very beautiful scenery. The gorge deep mountain stream, waterfall deep pool, deep and remote gully of cave with stalactites and stalagmites, take on allly cherishing. The river of the ancient seedling has the following four major characteristics:
First, the natural environment is fine. Huayuan county is in the intersection of Hunan, Chongqing, three provinces of Guizhou Province, it is the door of the northwest of Hunan, 319, 209 national roads run through the county town and cross, the traffic is very convenient. Ancient the intersection of seedling and river, because of the intersection of mountain and high the intersection of forest and dense characteristic oneself possess, form, have the cool administration, there are no forest local conditions of severe cold in winter summer, the average temperature of the whole year is 11.4 . Have natural air conditioners , big oxygen bar Laudatory title, it is called the high mountain pearl, has offered a recreation to people, recuperated, travelled and gone away for one s summer holidays in the famous scenic spot.
Second, numerous in the beauty spot. The quantity of scenic spot of scenic spot of river of the ancient seedling is numerous, distributed intensively, there is Chi Grand Canyon particularly, it is high mountain ten thousand mu of forests ecologicals, dragon hole waterfall group, stockaded village folk custom villages old, lasting I stone railing, lasting I reservoir, the rock style of writing peak, folk music lake water spring,etc.s sharps all kinds of. Especially Chi Grand Canyon particularly, the mountain high, slope is steep, the valley is deep, dense in the forest, its tendency is magnificent, magnificent, wonderful to the utmost point, have shape have inner beauty also while being American.
Third, the human cultural sight is varied and colorful. Numerous human cultural sights and history relics are for visitors to view and admire, such as ancient tomb group of the times, the earliest bridge of western Hunan in period in the Spring and Autumn and the Warring states The intersection of border town and the intersection of tea and hole, refined the intersection of the tenth of the twelve Earthly Branches and the intersection of cucumber and the intersection of stockaded village and the intersection of the universe and good the intersection of Miao and the people in the works of the ancient the intersection of copper and the intersection of loudspeaker and the intersection of bridge and site, Shen CongWen Mr. rise in revolt in the old site, wait for someone and bury tombses in state-run eight studying, defend the site of Acropolis of high mountain etc. luckily in two high old sites, high mountain parks, folk music tidewater precipices.
Fourth, romantic national conditions and customs culture. 265,000, total population of Huayuan county, among them the Miao nationality s population accounts for 80%, it is one typical the Miao nationality that live in concentrated communities in the county, they are keeping the conditions and customs custom with strong national characters completely. Such as the third of March , the eighth of April , dragon boat festival , catch autumn can Wait for more than 70. The Miao nationality song and dance such as dream like unreal, wonderful workmanship excelling nature, dress of the Miao nationality and handicraft of hand, sweet perfumes are diffused all around for the cooking culture, too beautiful to be absorbed all at once. Custom amusement: Also call the dejected bright performance of songs three times in March, hold the third day of the third lunar month in every year this day, the activity content is mainly to sing in antiphonal style in men and women s field, exchange the agricultural byproducts at the same time. The activity content of the eighth of April is extremely abundant, mainly have eat pigs , willow flag dance, last dragon dance, encouraging, monkeys drum, at one hundred sheetses of ladder, seedling song antiphonal responses and Wushu, qigong performance,etc.. House Miao catch autumn section in hold at the time of the beginning of autumn every year, one activity that congratulations have a bumper harvest.