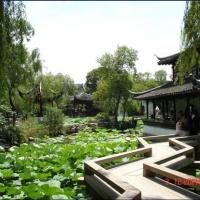 Ouyuan Garden (Lotus Garden) stands out even among the famous classical gardens of Suzhou. It was built in the Qing Dynasty (1644 - 1911) and in 2000 was listed as a UNESCO World Heritage site. It is composed of a large mansion and has houses built in the middle with two gardens set on either side, to the east and west. On three sides it is surrounded by a canal.

The Ou yuan garden features the most beautiful scenic spots and is laid out appropriately. The principal structure is a hall with double-eave roofs and faces the south, which is rare in the design of the garden of Suzhou. The major scenic spot of the entire garden is the Yellowstone Rockery built in the front of the Chengqu Thatched Cottage. 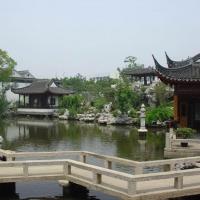 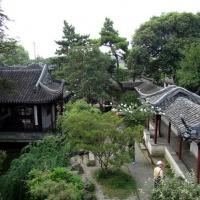 Ouyuan's East Garden features a hill rising from a pond, along with pavilions, terraces, and towers peppering the surrounding landscape. The hill is actually man-made, and was a masterpiece of Zhang Nanyang, a great master of landscape architecture in the late Ming Dynasty. The principal structure, City Corner Cottage, is a group of multi-storied buildings that sport double roofs, which are a traditional Chinese architecture. To the south of the pond lies the Water Pavilion Amongst Mountains. A feature of this pavilion is its large circular door, which measures four meters long and 3.5 meters wide, upon which are carved Chinese symbols of vitality, including pines, bamboo and plums.

The West Garden consists of studies, pavilions and courtyards. A limestone rockery sits at the entrance, and to the north of the hill is the Old House with Woven Curtains. Behind it there is a study and a tower shaped like an "L", with rocks, trees, and flowers in front of it. Ouyuan Garden has 24 buildings, 21 tablets and couplets, in addition to brick carvings and precious ancient trees.