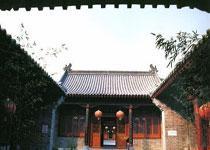 Luoyang reach car, county of Mengjin, know old town of alliance town the intersection of tongued bell and former residence Wang get off

Lie in the intersection of Mengjin and the intersection of city and the north, first Ming and Qing Dynasties type building. Amount to more than 260 collecting the calligraphy stone engraving with Wang Duo in the hall, 74 large-scale scrolls among them, the famous ones include more than 10 kinds such as drafting the mountain garden card , card of hall of China of the thinkling sound , tortoise s card of dragon s hall , in addition there are family tree, calligraphy and painting, self-portrait,etc.

Wang Duo has been clever and clever and quick since the childhood, officer Zeng is to the Director of the Board of Rites after growing up, he is longer than calligraphies, pen force grand to build script its, romantic charm fly, establish one s own system, have the supernatural the intersection of pen and tongued bell Wang Good reputation.