The museum of Jiangxi Province travels Nanchang of China

The museum of Jiangxi Province travels Nanchang of China 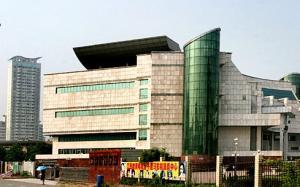 Jiangxi the intersection of Provincial Museum and new hall located in at the intersection of Nanchang and the intersection of city and the intersection of Jiangxi and river, new continent, until pavilion Wang Teng to famous in China and foreign countries only one hundred steps distant. The museum takes up an area of 4 hectares, with a construction area of 35,000 square meters, the exhibition hall is with an area of 13,000 square meters. The building model of the main body has absorbed the unearthed porcelain of Jing De-zhen of Ming Dynasty in Jiangxi Province -The intersection of model and characteristic of three device, adopt the intersection of solid and the intersection of model and tactics, corridor ingenious to combine with round, arc, round cylinder with cloister, ring, in an organic whole, there is abundant cultural intension in the artistic and modern architectural style of melting the ancient pottery, it is magnificent that there is a modern architecture.
Centre the intersection of square and sculpture imitate the intersection of bronze and arcual the intersection of door leaf and the intersection of arris and handle, imitate by three the most favourite historical relic do bronze large unearthed a Shang Dynasty such as Oceania newly , bend over the intersection of bird and pairs of the intersection of tail and tiger and the intersection of torch and 4 major part, make up, the magnificent civilization of the implied meaning, of long standing and well established; Good products from the earth are nature s treasures, a remarkable place producing outstanding people; A single spark can start a prairie fire.
The new hall is formed by historical hall, revolutionary hall, natural hall, it is the historical hall between two parties, south, north both sides are the revolutionary hall, natural hall, the cloister is connected between three halls, way communicates.
The historical hall has magnificent Jiangxi culture basic display and ancient bronze ware in Jiangxi , the conditions and customs, Hakkas of Jiangxi, , and whether Jiangxi tomb Wang specially open up Ming Dynasty four pieces of special display. These exhibitions, through a large number of history relics, literature pictures and model views,etc., and adopt sound, light, electricity,etc. modernly and display the means and bring the audience into remote historical period, appreciate the brilliant creation of the past dynasties labourer heartily, especially bronze ware and pottery make audiences feast one s eyes even more.
Revolutionary hall exhibit the intersection of revolutionary struggle and history, people of Jiangxi, display , reflect anti-imperialist and anti-feudal revolutionary struggle history, people of Jiangxi, since the Opium War in 1840, especially after the Communist Party of China was established in 1921, curtain massive revolutionary history drama of a scene of the performance on Jiangxi, this red land.
The natural hall exhibits style and features of Jiangxi land , the origin of life , the dinosaur s world , marine organism , insect s paradise , six special topics of light of geology , help the audience to know the nature, find out about bright and beautiful scene and abundant resource in Jiangxi, increase scientific knowledge. the dinosaur s world displays the means with its bionic, artificial sound, light, electricity,etc., the image has reproduced mighty majestic appearance and living environment of the dinosaur lifelikely, furthermore make the audience on the spot in person and so enchanted by the scenery as to forget to return.