Chen Yun travels in the memorial museum Shanghai of China

Chen Yun travels in the memorial museum Shanghai of China 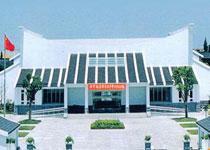 5 yuan for each person. Students visit and implement group freely

The memorial museum is located in Chen Yun birthplace -Practise the pool town in Qingpu District of Shanghai, the hall district abuts the city river in the north, the south harbour of Linxi pool, cover an area of 3.467 hectares, the architectural design has reflected the South characteristic, and try hard to keep the style identical and harmonious with Chen Yun former residence and peripheral folk building.

Memorial museum main hall 14 meter high, amount to three (two on the ground, the intersection of place and the next layer) ,With a construction area of 5500 square meters. The architectural design not only reflect the style of local-style dwelling houses of the South but also gives consideration to the great dimension characteristic of the modernized memorial museum, simple and serious.

The white marble statue of Chen Yun 3.6 meters high stands in Preface Room, the statue has portrayed the initiator that Chen Yun is regarded as economic construction of the republic and magnificent images one of the founders vividly. The background of the statue is the bamboo shoots after a spring rain, the cause that the older generation of proletarian revolutionist of implied meaning opens is growing vigorously.

Have planted two kinds of bamboos before the statue Square bamboo and round bamboo. The bamboo is a symbol of the bright quality such as being modest, honest, clean and tough and tensile, also the favorite plant before Chen YunSheng. Four exhibition halls on the first floor, second floor basically show that reflect historical datas such as Chen Yun s picture, literature, material object in brilliant all one s life,etc.

in the order of time. The ground, the next layer, is the historical display drawing room of the revolution of Qingpu, regarding time as the order shows the people of Qingpu are under the leadership of the Communist Party of China, carry on socialist revolution and glory course of construction. Display and arrange exhibits and fully use various show means, make every effort to reach content and formal perfection to unify.

After the shop is small building of two storeys, occupied by uncle Chen Yun parents upstairs, it is the room that Chen Yun has inhabited downstairs, so the original appearance that Curie s furnishings basically keep of those years of now.