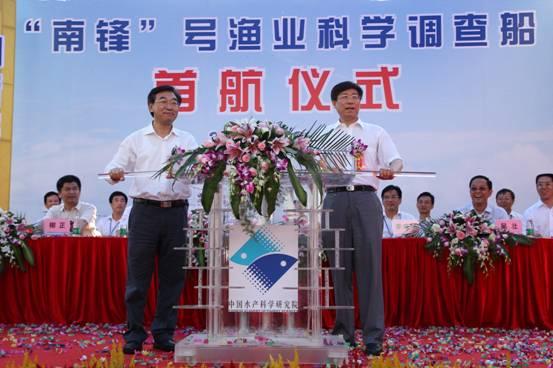 On August 3, the maiden voyage ceremony of Nanfeng fishery research ship was held in Guangzhou by the South China Sea Fisheries Research Institute under the Chinese Academy of Fishery Sciences (CAFS). At the simple yet grand ceremony, Zhang Taolin, Vice Minister of Agriculture, delivered a speech and, joined Yang Jian, Chairman of the Supervisory Board for Key Large State-Owned Enterprises, in sounding the whistle, marking the sailing of the ship to the waters off the Xisha Islands on a mission of exploring marine cephalopod resources.

Professor Zhang Xianliang, President of CAFS, expressed his appreciation to the National Development and Reform Commission, the Ministry of Finance, the Ministry of Science and Technology, and the Ministry of Agriculture for their great support. He said that the building and operation of the ship would make positive contribution to strengthening the research of fishery resources in the South China Sea, safeguarding the rights and interests of marine fisheries over there, and carrying out the national strategic policy of letting fisheries top the agenda for exploring the Nansha Islands. Besides, Nanfeng and Beidou research ships (the latter from the Yellow Sea Fisheries Research Institute) will work together like southern and northern flanks to undertake the task of studying fishery resources and ecological environment in China s major waters, and lead CAFS in playing a significant and supportive role in safeguarding the rights and interests of ocean fisheries and serving national strategies.

It is learned that Nanfeng is China s first self-designed and self-developed comprehensive ship with independent intellectual rights, dedicated to research in fishery resources and environmental sciences. The ship of 1,537 gross tons, which is 66.66 meters long and 12.4 meters wide, can sale for 60 days and nights with no stop in non-restricted waters with the endurance ability of 8,000 miles, and the highest speed of 14 knots. Its sea-keeping ability, great resilience and maneuverability makes possible the sail and investigation under various sea conditions. 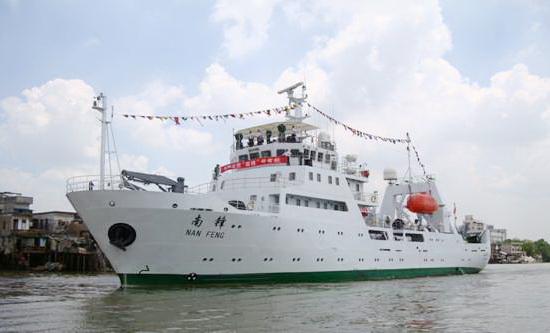