Apartment rents in China's major cities witnessed sustained growth in the first six months of the year even though property prices saw a gradual drop.

In Beijing, the average rent of an apartment rose to 2,792 yuan (US$410.6) a month in the first half of the year, a year-on-year jump of 18.5 percent, according to data from Homelink Real Estate, a leading property agent in the capital. 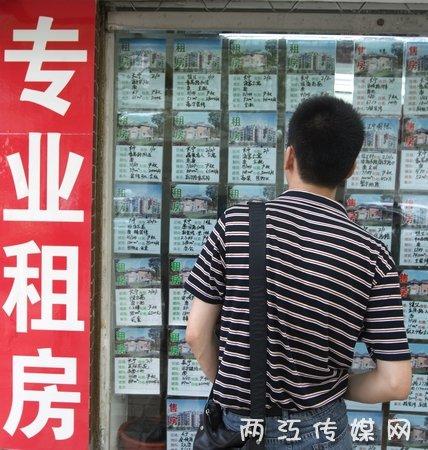 The rent increased even further over the past two months, with the average hitting 2,885 yuan in the Chinese capital in May, up 19.8 percent from the same period in 2009.

A property broker surnamed Zhang said the rent of a two-bedroom apartment has now hit 3,300 yuan, a 300-yuan increase in two months.

"The rent of a luxuriously decorated single-room flat with a toilet and a kitchen in the city proper has increased to at least 3,200 yuan a month from 2,500 yuan last year," Zhang said.

Apartment rents are now higher than the average monthly income of many migrant workers in Beijing, she added.

According to insiders, rents will continue to rise in the second half of the year due to the high demand.

"Many potential apartment buyers have chosen to rent for now after the central government introduced special measures and policies to cool the country's overheated real estate market," an expert said.

Customers believe property prices will continue to drop in the coming months, he said.

More than 80,000 university graduates are expected to become tenants in Beijing this year, which would further drive the rents up in the near future.

Rents will not come down till the fourth quarter of the year, experts said.

Property rents in Shanghai, Guangzhou, Shenzhen and other major metropolises in the country have also witnessed rapid increase between January and June this year.

In Guangzhou, capital of Guangdong province, rents have increased by 10.9 percent over the last two months to hit an average of 30.44 yuan per square meter in downtown areas.

Xiao Wenxiao, a property analyst with Mantanghong Real Estate, said: "Rents in Guangzhou hardly jumped when property prices in the city increased rapidly in past years."

Li Yihua, an analyst at Guangdong Centraline Property Co Ltd, is certain that rents in Guangzhou would continue to grow in the second half of the year.

In addition to university graduates, a large number of white collar workers will have to find new apartments to rent as the city government starts reconstructing many urban villages, Li said.

Demolishers have already started bulldozing houses in the city's urban villages of Linhe, Yangji and Liede to make way for the reconstruction plan.

The city's urban villages in the downtown areas used to offer plenty of low-rent apartments.

Experts predict a 20-percent increase in rents in Guangzhou this year.

Rents in Shanghai and the southern booming city of Shenzhen also saw a 10-percent increase in the first six months this year.