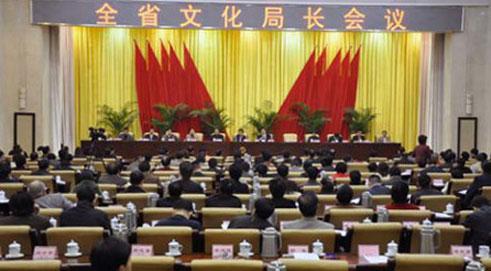 Directors' Conference of Hunan's cultural bureaus was held in Changsha on March 30. Relevant provincial leaders from the Publicity Department of the CPC Hunan Provincial Committee and the Hunan Cultural Department, and directors of the cultural bureaus in cities and counties attended the conference. Speeches on public cultural service, mass theatrical performance, the protection of intangible cultural heritage, and the construction and operation of cultural stations were delivered.

According to the conference, a series of cultural activities will be staged by the cultural bureaus, including the First National Poems and Couplets Competition, 2011 Zhangjiajie International Country Music Week, the 9th China Yingshanhong Folk Opera Festival, Hunan Cultural Week in Sino-Italy Year, and the First Hunan Traditional Musical Instrument Competition. Cultural bureaus will make great efforts to create excellent plays, provide the public with free access to all the libraries, cultural centers and art galleries by the end of this year, and further promote the projects of "Plays Going to the Countryside and Benefiting the People", as well as highlight the reconstruction of Hunan Provincial Museum and Hunan Provincial Library. In addition, the construction of 1,058 integrated cultural centers should be completed in 2011. Cultural bureaus should also pay attention to protecting National Archaeological Park of Tongguan Kiln in Changsha, Yongshun Laosi Town in Xiangxi Tujia and Miao Autonomous Prefecture and the Historical Park of Liye Ancient Town, and facilitating the application of Fenghuang (Phoenix) Ancient Town to be listed as a cultural heritage site.