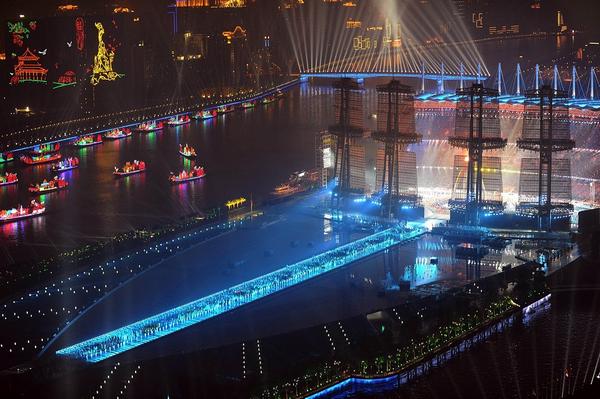 Photo taken on Nov. 27, 2010 shows floats and lights on the Zhujiang River, or the Pearl River, during the closing ceremony of the 16th Asian Games held at the Haixinsha Island.(Xinhua/Guo Dayue)
Haixinsha stadium was the main site built for the opening and closing ceremonies of the Guangzhou Asian Games. It was praised for its original architecture and the manner in which it was used during the ceremonies to integrate the city itself into the show. But there has been a lot of talk about what the stadium will become after the Asian Games.
According to the Guangzhou Asian Games Organizing Committee (GAGOC), Haixinsha Island will open to public after it is transformed it into an outdoor theatre and cultural square, with high class restaurants and bars. Located next to Guangdong Museum and the Guangzhou Opera House, Haixinsha's location guarantees it will become an important cultural center for tourists and locals alike. The four LED screens which look like large sails will also be kept.
During the New Year, it is believed that the stadium shall host 3 special performances.
Source:Lifeofguangzhou.com