Lights Off in 86 China Cities During 'Earth Hour'

Lights Off in 86 China Cities During 'Earth Hour' 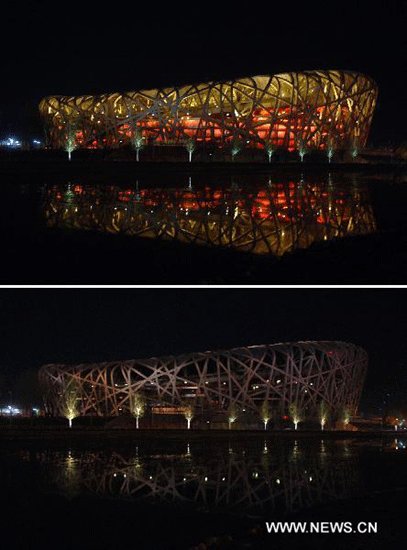 A combination picture shows the National Stadium, also known as the Bird's Nest before (Top) and during Earth Hour in Beijing, March 26, 2011. Main buildings and areas in many cities of China participated the Earth Hour on Saturday evening. Lights were turned off for one hour to take a stand against climate change.[Photo: Xinhua/Zhao Wanwei]

Beijing's Great Wall, "Bird Nest" Stadium and Shanghai's Oriental Pearl TV Tower are among the numerous buildings in China's 86 cities that went dark as hundreds of millions of people around the world turned off their lights Saturday during the "Earth Hour".

The public's enthusiasm on the event reached new height as Chinese cities took part in it for the third time. It is one of the most heated topic over the Internet. On every major Chinese portal website, hundreds of thousands of Internet users posted comments about the "Earth Hour".

Volunteers had been offering brochures on the streets early in the morning. In Beijing's subway stations, large photos of Chinese actress Li Bingbing, who postured to invite commuters to join the program, have been posted months in advance.

The lights were being turned off from 8:30 p.m. local time around the world.

The event kicked off in the Pacific and then rolled into Asia, Europe, Africa and America as it followed the descending sun.

Residents of Chuangchun City, capital of northeastern Jilin Province, marched in darkness after the road lights went off along the People's Avenue. Students of colleges in Changchun held candle parties to celebrate the hour. < At 8:30 Saturday night, lights of the dorms in Harbin Engineering University (HEU) in northeast China's Heilongjiang Province went off. Despite the cold weather, students gathered in heart-shaped circles on the playground.

Students of HEU said they wanted to show their support of the Earth Hour event and also pray for the victims of the earthquakes that hit Japan, China, Myamar and Thailand in March.

Local resident Yao Zhenyu took his son to a large square in Qingdao City of east China's Shandong Province to see lights turned off. "I've been teaching my son to turn off electric devices in time and print on both sides."

China is among 134 countries or territories on board for this year's event, said Earth Hour founder and executive director Andy Ridley.

The Eiffel Tower in Paris and the World's tallest building in Dubai also had their lights turned off for 60 minutes as part of the event in support of environmentalism.

"The amount of power that's saved during that time is not really what it's about," Andy Ridley said, "What it is meant to be about is showing what can happen when people come together."