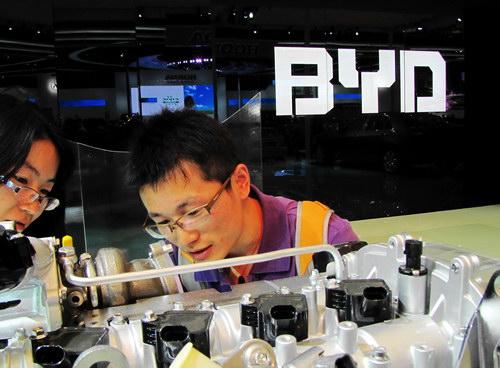 BYD Co cited the end of tax breaks for small cars and tougher competition for a decline in vehicle sales for 11 straight months through June. [Photo/China Daily]

China's passenger vehicle sales continued to cool in August from a two-year boom spurred by government incentives, making clear the automobile market will not break the 20 million unit barrier as was expected this year.

"Although China's passenger vehicle sales in August reported year-on-year growth similar to previous months and will be better in the third quarter - traditionally the hot season for auto sales - we still believe there is no sign of a market recovery from the current stagnancy," said Rao Da, secretary-general of the association.

In June, Rao made the bold forecast of a possible negative whole-year growth rate, the first since 1992.

The sluggish market performance also made Dong Yang, vice-chairman of the China Association of Automobile Manufacturers, lower his previous expectation of 10 to 15 percent automobile sales growth in China this year to about 5 percent.

Xu Changming, director of the State Information Center under the National Development and Reform Commission, said that China is likely to deliver about 19 million vehicles this year, falling short of the expected 20 million.

The lowered estimates compared with the Chinese automobile market's 32 percent year-on-year growth in 2009 and 46 percent in 2010.

Government efforts in those two years to support the auto industry with tax breaks on purchases and subsidies on trade-ins in rural regions helped the country surpass the United States to become the world's biggest vehicle market.

The shrinking market has hit automakers, especially China's domestic vehicle producers, some of whom have reported net profits falling in the first half.

"The negative growth in profit will continue or swell in the second half, as the price reductions, which automakers have to resort to spur their sales, will further eat their profits," said Cao He, auto analyst with China Minzu Securities.

Dongfeng Motor Corp, the country's third-largest automaker, reported a 22.97 percent profit decline in the first half compared with last year, citing the slowing market and rising labor and logistics costs.

FAW Car Ltd Co, the Tianjin-based subsidiary of FAW Group, also reported a profit decline of 39.84 percent year-on-year in the first six months. The manufacturer sold only about 140,000 vehicles during the period.

The biggest profit loss and sales decline was reported by BYD Co Ltd, which is backed US billionaire Warren Buffett. The Shenzhen-based automaker's financial report showed that first-half net profit dived sharply by 88.6 percent from a year earlier, as sales dropped 23 percent to 220,000 units during the period. BYD had previously set a sales target of 800,000 units for the whole year.