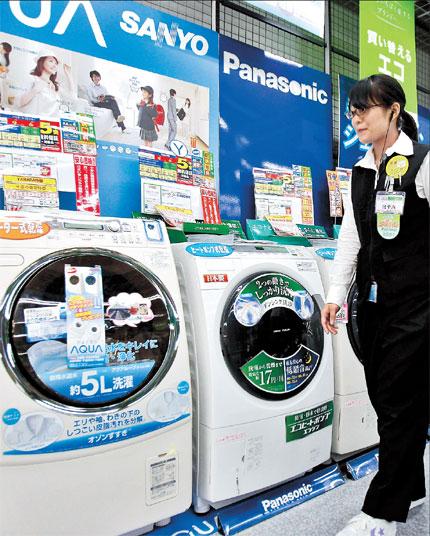 A sales assistant walks past a Sanyo washing machine (far left) at an electronics retail store in Tokyo, yesterday. Panasonic has agreed to sell its Sanyo brand's washing machine and refrigerator business in Japan and southeast Asia to Chinese rival Haier. [Photo/Shanghai Daily]

China's Haier Group Co will buy Panasonic Corp's Sanyo Electric washing machine and refrigerator units in Japan and Southeast Asia for about $130 million, in a move that will give the Chinese appliance giant better access to the world's third-largest economy, sources said.

Haier, which outbid at least one rival eyeing Sanyo's energy-efficient refrigeration technology with the 10 billion yen deal, has been seeking to expand in Japan's tough white goods market, four sources familiar with the matter said.

Haier, which partnered with Sanyo in 2002 to gain a toehold in Japan, has taken a share of over 50 percent in the market for small refrigerators, and has been preparing to compete with Japanese makers head-on in mainstream washers, air conditioners and refrigerators with lower prices, one source said.

"Japanese makers have overwhelming market share in Japan only because this is Japan," said one source involved in a competing bid.

"If Haier can produce a lineup of low-cost and energy-efficient appliances here, it could be a real threat to Japanese manufacturers."

The white goods market in Japan is dominated by domestic heavyweights Toshiba , Mitsubishi Electric and Hitachi as well as Panasonic.