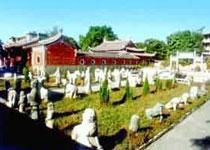 Located in the east small stream side of county town with Ann Confucian Temple. Established in five generations, the extant building was the 32nd year of Qianlong in Qing Dynasty (1768) ,Dacheng Palace which county magistrate Wu Yong rebuilds. With an area of 1050 square meters, renovated again in 1987.

Have a rest in the mountain type building, the high type behind the corridor in front of 15 purlins for the layers of eaves in the subject Dacheng Palace, the sets of brackets on top of the columns fly in the eaves criss-crossly, the wood carving is abundant in content, technology is high and profound.

Confucian Temple is the place of offering sacrifices to Confucius in successive dynasties, is the quite famous school too. It is the same as Ann museum to already lay out into now, has been displaying it with Ann s relics since Western Han Dynasty, virtuous famous official and historical relic of successive dynasties in the remarkable township.