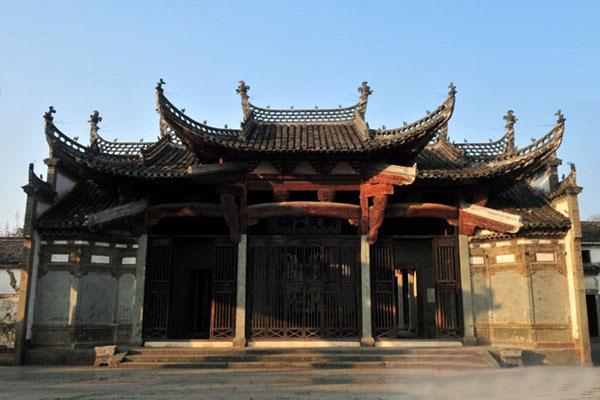 Located about 40 kilometers away from Mt. Huangshan, Chengkan Village is renowned for its well-preserved residential architecture of Ming Dynasty (1368 AD - 1644 A.D).
Chengkan Village is a wonder among the ancient villages in China for its elaborate layout. The whole village is arranged according to the theory of "the Eight Diagrams" in the I Ching (also Yi Jing in Chinese), or Classic of Changes, one of the oldest of the Chinese classic texts. And Chengkan Village turns out to be a "maze" in a bird's eye view: three main streets and ninety-nine lanes criss-crossing the village with hills and rivers surrounding it. The special layout of the residences together with the mother river of the village, Longxi River, are believed to bring liveliness and fortune to the whole village and the welfare will be passed down from generation to generation.
Chengkan Village has a long history, and suprisingly, it has still kept the layout of the original village built about 1800 years ago. This ancient village integrated the featured Hui style houses (white wall and gray tiles), green hills and clear streams to make a peaceful dwelling for more than 700 households. Compare to Xidi and Hongcun villages, Chengkan is underdeveloped and not as well-known, but it is a pristine village with less tourists and more rural and idyllic atmosphere.
Chengkan Village is a also perfect representative of Anhui architectures. The ancient architectures contain elegant pavilions, houses, bridges, wells, ancestral temples, etc. Moreover, there are exquisite stone carvings, brick carvings, and wood carvings on each house.
The ancestral temple of Chengkan village is noted for its architecture. The Baolun Hall in ancestral temple is a outstanding example of the refined beauty of Chengkan's architecture. It is very fascinating to see the elaborate engravings of flowers and geometric pattern on the bluestone parapets and creative colored paintings on the beams, lintels and doorframe. The colors remain bright and fresh although throughout ages. A pair of wooden staircases ascend to the second floor on which through the finely engraved windows, visitors can have a good view of the Mt. Huangshan.