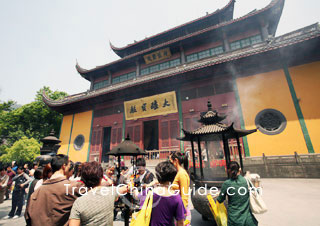 You will find Temple of Soul's Retreat (Lingyin Temple) in a long, narrow valley between Peak Flown From Afar (Fei Lai Feng) and North Peak to the northwest of the West Lake at Hangzhou in Zhejiang Province. It is without doubt a premier showpiece in the West Lake environs and is notable also as one of the ten most famous Buddhist temples of China. In 1961 it was listed for protection as a key provincial historical and cultural site and is considered a leading centre for research relative to Chinese Buddhist culture.

The presence of a temple on this site can be traced back to the Eastern Jin Dynasty (317 - 420AD) when, according to local legend, Huili an Indian monk came to the area where he was inspired by the spiritual nature of the scenery to be found here. To his mind this had to be a dwelling of the Immortals and so he gave the temple a name Temple of the Soul's Retreat. The Chinese name is translated into English as either "Temple of the Soul's Retreat' or 'Temple of Inspired Seclusion' for the setting has a quiet and beautiful grandeur that encourages a feeling of peace and for contemplation.

The temple was to gain in importance during the Five Dynasties (907-960 AD) when the King of the Wu Yue State initiated a large-scale development of the temple as a sign of his devotion to Buddha. In its heyday, the temple comprised nine buildings, eighteen pavilions, seventy-seven palaces and halls with over thirteen hundred rooms providing accommodation for around three thousand monks. A monastery on this scale is difficult to imagine and needless to say over the centuries it has been subjected to many changes of fortune due to wars, religious repression and other calamities. The main building that can be seen today is a result of the restoration that was carried out in 1974 following the ten-year Chinese Cultural Revolution.

Temple of Soul's Retreat in Hangzhou

Upon entering the first hall of the temple, you will see a tablet inscribed with words penned by Emperor Kangxi of the Qing Dynasty (1644 - 1911). He was inspired by the sight of the temple shrouded in mist amongst the trees that surround it and gave it the title 'Cloud Forest Buddhist Temple'. This first great hall, with its double eaves and some sixty feet in height, is the 'Hall of the Heavenly Kings.' Upon the door is a couplet that says 'Let us sit and wait upon the threshold, where we shall see another peak flying from afar. Let us welcome spring with a smile as the snow melts and the brook starts to flow once more.'

Upon entering the Hall your eyes will be drawn to the delicately painted ceiling decorated with phoenixes and dragons. Images of the Four Heavenly Kings stand upon either side of the Maitreya, a laughing Buddha with a huge belly who is said to be able to 'endure all intolerance and laugh at every laughable person in the world,' as he welcomes those who enter the hall. On passing through this hall and crossing the courtyard beyond, you then enter the Da Xiong Bao Dian. This is the Hall of the Great Hero. It is seven rooms wide, five rooms deep and single storey construction. The double eaved roof soars to a pinnacle of 33.6 metres (110 feet) making it probably the highest single storey buildings to be found in China. The hall houses a statue of Sakyamuni carved from 24 sections of camphor wood with an overall height of 24.8 metres (82 feet). This is one of the largest wooden statues in China and is covered with gold leaf. The statue is flanked on either side by twenty saints. These are said to be protectors of justice. Twelve disciples who serve as guards are seated along the rear wall. The figures are a very imposing and impressionable sight to behold.

Continuing through the complex, you will come in turn to the Pharmaceutical Master Hall, Great Mercy Hall and the Cool Spring Pavilion. This latter pavilion was erected a thousand years ago during the Tang Dynasty. It is very pleasant place to linger during the heat of summer when the softly murmuring spring has a cooling effect upon its surroundings.

The Temple contains an important collection of Buddhist literature together with many other treasures. As a consequence it is a great centre of information for those who wish

to study aspects of Chinese Buddhism in detail. The palaces, pavilions and halls together with their many figures of Buddhist deities represent in total a splendid and unique collection of architectural and artistic cultural relics. The various buildings and pagodas date from the Southern Song, Ming and Tang Dynasties. Among the ancient writings are scriptures written on pattra leaves, the Diamond Sutra copied by Dong Qichang in the Ming Dynasty and a wood cut edition published during the Qing Dynasty.

To add a final memorable touch to your visit, it is very pleasant to dine at the Lingyin Vegetarian Restaurant located nearby. The vegetarian dishes on offer are typical of the Chinese culinary style and it is little wonder that in such a setting the excellent repast is frequently regarded as 'food for the gods'.