In the morning of July 2nd, the Ministry of Railway of the People s Republic of China signed the Minutes of Meeting to Accelerate the Railway Reconstruction after the Earthquake Disaster in Sichuan Province with the Sichuan Provincial Government, a significant measure by the ministry to support the economic and social development in Sichuan Province after the disaster. As the leader in the railway industry in Sichuan Province, three CSR China South Locomotive & Rolling Stock Corporation Limited subsidiaries won the big orders--including 500 high power electric locomotives, 4,000 freight wagons and overhaul of 300 locomotives every year and the newly-increased order amounted to nearly 20 billion RMB Yuan. This move has caused strong positive response in CSR. 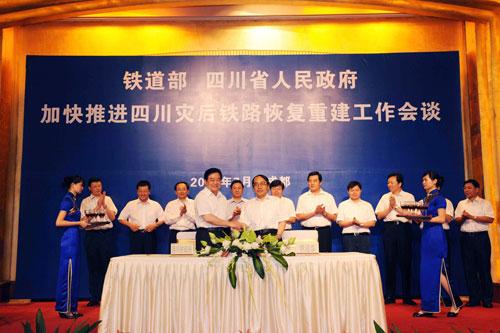 According to the Minutes signed by Liu Zhijun, Minister of Railway and Liu Qibao, Secretary of CPC Sichuan Provincial Committee and Sichuan Governor Jiang Jvfeng, the Ministry of Railway and the Sichuan Provincial Government will launch cooperation in the aspects of railway development like building of ex-Sichuan passages, building of inter-city railways, building of Chengdu Railway Hub, renovation of existing railway lines, railway industry rehabilitation and guarantee of railway transportation.

It is also known that HX 6-axis high-power electric locomotive is the most advanced one in China and the agreement for 500 ones means a strong driving force for CSR Ziyang which has completed its integration of electric locomotive manufacturing resources. CSR Meishan and Chengdu had their annual production volume of over 3,800 freight locomotives and annual overhaul amount of not more than 260 ones in the past three years, so such an agreement of annual production volume of 4,000 freight wagons and overhaul volume of 300 locomotives will undoubtedly become a strong propeller for the two subsidiaries to recover their operation in an all-around way after the disaster.

These projects will effectively address the problems in the local railway networks in Sichuan and even Southwest China, like low density, low standards, severe shortage of passages in and out of Sichuan and poor flexibility, and they also mean new opportunities for the development of the railway industry.

President Zheng Changhong of CSR also attended this meeting. He remarked that given the general picture of recent intensified support by the government departments concerned for the reconstruction of Sichuan after the disaster, particularly after CSRC China Securities Regulatory Commission completed its auditing over CSR s application for listing at the A share market, the signing of the Minutes by the Ministry of Railway and the Sichuan Provincial Government gave another strong boost to the recovery and rapid development of Sichuan-based CSR subsidiaries, so CSR will take the government support as a strong driving force in its development of the railway industry and inject preferential funds to help the subsidiaries concerned complete the orders in a high-quality and efficient manner, hence make its due contributions to the recovery of Sichuan railway networks.