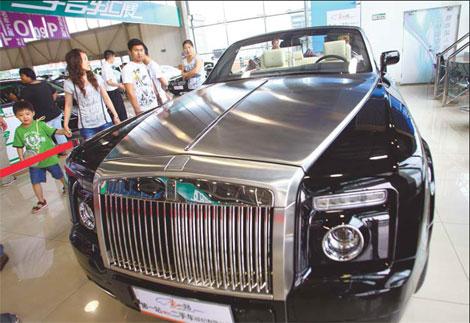 A second-hand Rolls-Royce, which has a price tag of 8 million yuan, on display at a second-hand luxury car store. ZOU HONG / CHINA DAILY

Sales of secondhand luxury cars have been declining since November and touched a new low in May, according to officials at the Huaxiang used car market in the Fengtai district.

According to Wang Meng, director of the market, secondhand cars costing about 600,000 yuan are selling well, but more expensive vehicles are no longer popular.

"It is related to the current economic conditions. Since the stock market and real estate are slumping, our rich customers are getting more cautious when spending their money," Wang said.

Huaxiang is the biggest secondhand car market in China. It covers around 337,000 sq m and sells more than 60,000 vehicles every year.

At the market, secondhand hardly means shabby or cheap. Many of its cars are valued in the millions of yuan.

As the biggest secondhand car market in Beijing, Huaxiang opened a 7,200 sq m hall on May 5 to sell secondhand limousines which are priced above 600,000 yuan.

In this spacious exhibition hall, 13 dealers sell about 200 high-end cars, including marks as Maserati, Lamborghini and Rolls-Royce.

Guo Jian, manager of The First Station Second Hand Car Co Ltd, said his sales have dropped significantly since the beginning of the year, and took a notable dive after April.

"There is no way to catch up with the sales record of 2009," when he sold as many as 500 limousines, Guo said. He estimates that his sales are down 10 percent so far this year, compared with the same period in 2009.

Guo owns one-quarter of the space in the limousines hall, where he stocks 80 cars priced from 600,000 to 9 million yuan.

"The cars here are worth 70 million to 80 million yuan," said Guo, who concedes he now must sell at least one or two cars every day to maintain cash flow.

Guo has been in the business since 1996. He has built various channels to acquire high-end cars.

"Channels are very important," said Mu Shuai, another dealer at the Huijinxiang Old Motor Vehicle Brokers Co Ltd. "Some big dealers have contacts in 4S stores, where they can get the display models which are in good condition but are not allowed to be sold."

Business has been challenging, but Guo said he has managed to break even.

Most cars Guo sells are less than two years old.

Not all the dealers are bold enough to sell such high-end cars. Ma Hongguang, manager of the Source of Old Motor Vehicle Brokers Co Ltd, only sells cars priced at about 600,000 yuan.

"Cars at this price go quite quickly, so we have a rapid capital flow," Ma Hongguang said. According to Ma, a customer can save up to 20 percent on a secondhand car in this hall.

The rental cost for space in the hall isn't cheap, though. Ma said he pays more than 1 million yuan to exhibit his 20 cars within the hall.

Sellers outside the limousine hall also lament a shortage of buyers for pricey, though much less expensive automobiles.

"When the market was good in 2008 and 2009, I could sell more than 10 cars every month; now even though we have reduced prices by 10 percent, we hardly attract half as many customers," a salesman told METRO.

The prosperity lasted until November, when the government introduced a policy to encourage the purchase of low-emission cars.

"Fewer people came here for secondhand cars since they can buy a brand new car at a quite reasonable price," the salesman said.

The cost of renting space hasn't fallen to match the drop in sales, though. To exhibit 30 cars, the salesman pays 2,000 yuan every month.

According to the China Automobile Dealers Association, secondhand cars notched a sales increase of 12 percent from January to May over the same period last year, but luxury vehicles haven't contributed to the growth.

Although the secondhand car market (including lower priced vehicles) is going up compared with the record last year, it is losing momentum, experts said.

"During the past 10 years, the secondhand car market kept expanding by 20 percent annually. However, it slowed down to 12 percent in the first quarter of 2010," said Shen Rong, deputy secretary-general of the China Automobile Dealers Association.

According to the association, the average price for each used luxury car transaction is 442,000 yuan.