An increasing number of joint-venture life insurers are diluting their shares in foreign stocks in favor of domestic ones, banking on local insurers expanding more quickly.

"The stake change is an important step not only for Sun Life Everbright Life Insurance but also for Everbright Group's strategic efforts in becoming a financial conglomerate," said Tang Shuangning, chairman of Everbright Group. 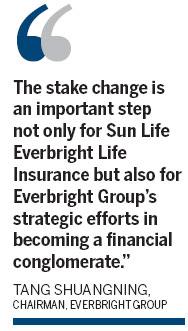 "The insurance regulator's restriction on joint-venture insurers' geographical expansion is one of the major reasons for the growing identity change," said a chief representative officer of an international insurer.

Though the China Insurance Regulatory Commission has no stipulation on how many branches a joint-venture life insurer can open each year, the regulator restricts the number to two at most in practice. But for local insurers, opening seven to eight branches a year is quite common.

Established in 2002, Sun Life Everbright only opened 12 branches over the past eight years. But the geographical expansion of local insurers is much faster. Anbang Insurance, for example, was set up in 2004 and now has 37 branches.

Insurers did see an improved performance after the stake reshuffle. From January to July, Sun Life Everbright's premium income has jumped 428 percent on a yearly basis, compared with the industry's average of 34 percent.

Tang said the change of the stake portfolio is a move to deal with market change and fierce competition.

According to China's commitment to the World Trade Organization, foreign life insurers are only allowed to set up a joint venture in China rather establish themselves unilaterally, and their stakeholds in it should be no more than 50 percent.

"Due to the difference in management philosophy and strategic planning, the performance of joint-venture insurers is not up to stakeholders' expectations. Some foreign stakeholders suffered from the financial crisis. As a result they are willing to reduce their stakes," said Hao Yansu, an insurance professor at the Central University of Finance and Economics.

Meanwhile, cooperation between banks and insurers will be intensified due to better synergy, as evidenced in the stake reshuffle, he added.

"We also signed a deal with ICBC (Industrial and Commercial Bank of China) to promote our bancassurance business which is an important way to expand scale in the short term," said An Qingtao, deputy general manager of Aeon Life Insurance Beijing branch.