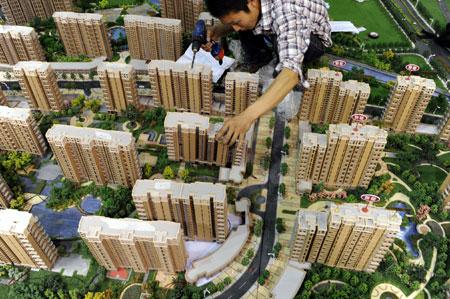 An employee fixing the model of a property project at a recent housing expo in Hangzhou. [China Daily]

China's real estate investment trust (REITs) plan is now in the last lap of approval from the State Council, after getting the green light from the concerned ministries, sources familiar with the matter said on Wednesday.

"If everything proceeds as anticipated, the first batch of REITs may be launched in the second half of this year. Only institutional buyers would be allowed to purchase the REITs initially," the source said on condition of anonymity.

In August 2009, a special team, led by the central bank and comprising of 11 ministers, was established to speed up the research and development of REITs in China.

According to the source, Shanghai would be the first center to roll out an unlisted REIT. The instrument would, in all probability, be supported by State-backed companies like Waigaoqiao, Lujiazui, Jinqiao and Zhangjiang, which own office buildings and warehouses in free trade zones.

Though analysts have expressed concern that the recent realty curbs may hamper REIT growth, property consultant DTZ Director for Valuation and Advisory Services Hu Feng feels that much of it would depend on the structure of the REITs.

"If the realty packaged into the REITs is low-rent housing, it would help the government to raise money to build more affordable homes for low-income families. More supplies would also ease the pressure on soaring property prices," said Hu.

"Since there is excess liquidity in the market, we need to open more investment channels for the money to flow into," said Qin.

"REITs have often been a big investment market, especially in the United States, Australia and Singapore."

Typically REITs invest in commercial property and use the rent they receive to make dividend payments to shareholders.

According to DTZ, commercial property transactions in the mainland totaled $25 billion in the first quarter of this year, accounting for 65 percent of Asia's total.

But given the taxation problem and risk concerns, the government may initially opt only for REITs that can be traded at inter-bank markets, and restrict the participation to institutional investors. At a later stage it may come out with listed REITs for individual investors.

Institutional investors such as insurers and banks consider REITs an attractive investment tool to diversify their portfolios, as they are comparatively safe and offer stable returns compared with equities.

"We are keen on REIT investments only if the yields are higher than government bonds. It's got to be around 5-6 percent before it interests us," said Zheng Weigang, head of investment at Shanghai Securities in an interview with Reuters.

"We see REITs as a longer term investment, comparable to bonds, rather than property stocks, which can be quite volatile," Zheng said.

Industry statistics show REIT investment returns in Asia are usually in a 5-10 percent range, much higher than government bond yields.