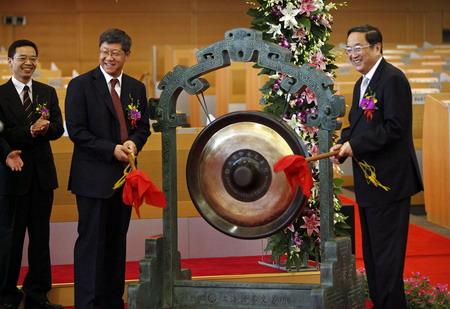 Tang Shuangning (center), chairman of China Everbright Group Ltd, rings a gong to mark the bank's listing on the Shanghai Stock Exchange in Shanghai on Aug 18. The Chinese initial public offering market has become the biggest in the world. [Photo / China Daily]

BEIJING - Initial public offering (IPO) financing in the Chinese A-share market hit a new record by volume this year, ranking it top among stock markets worldwide. The market is expected to maintain the momentum next year.

By the end of last week, the Shanghai Stock Exchange and Shenzhen Stock Exchange had handled 327 IPOs, raising 468.52 billion yuan ($70.42 billion) in 2010, according to Wind Information Co, a Shanghai-based provider of financial data.

On the Shenzhen Stock Exchange, the small- and medium-sized enterprises (SMEs) board attracted 193 IPOs, 59 percent of the new issues, and the Growth Enterprise Market (GEM) board had dealt with 109 IPOs, accounting for 33 percent.

The SMEs board has raised 192.99 billion yuan, the most in the Chinese A-share market, about 6.94 billion yuan more than the main board.

"The Chinese IPO market has become the biggest in the world, and it attracted many SMEs and high-tech companies to go public, which has enhanced the vitality of the capital market," Song Liping, general manager of Shenzhen Stock Exchange, said on a financial forum.

Chinese regulators have adjusted some rules to support SMEs to directly raise funds in stock markets, and more private capital was injected into the stock pool, according to Song.

In early November, new rules issued by the China Securities Regulatory Commission came into effect. The regulations allow underwriters to allocate more shares to every institution for smaller IPOs.

The central regulator's new measures to reform the IPO pricing and underwriting have increased the number of price inquiry institutions, such as fund houses and securities brokerages. The players called for higher IPO prices to bet more profit from the newly-listed stocks, which was also a reason behind the boosted IPO stock values, according to analysts.

Hangzhou Robam Industrial Group Co Ltd, a maker of cooker hoods, gave the market a surprise when its share price surged 63.17 percent to 35.1 yuan on its trading debut. Sichuan-based snack company Fuling Zhacai Group witnessed a 191.64 percent rise in its stock price on the first day of trading.

The growing number of IPOs indicates that the core of the global financial market has moved into emerging economies, especially in China, a report from Economy Daily quoted Matthew Koder, chief of the global capital market research department of United Bank of Switzerland, as saying.

There are about 300 companies waiting for approvals to get listed, and more than 500 companies are preparing to go public, said Song.

"SMEs will continually play significant roles in Chinese stock markets, and the next two to three years will be more important for the GEM board," she said.