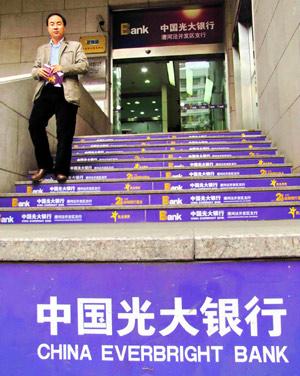 A branch of China Everbright Bank in Beijing. [Shen Jingwei / For China]

BEIJING-China Everbright Bank Co's public float of 6.1 billion shares in Shanghai will not have drain liquidity from the bourses, analysts said on Friday.

They said the lender may raise as much as 21 billion yuan ($3 billion) from what would be the second-largest initial public offering on the mainland markets this year.

"The float will not have a major impact on the market, as only 10 billion yuan worth of shares will be traded in the secondary market. The market has already factored the share sale," said Wu Wei, a banking analyst with Industrial Securities.

Wu expects the bank shares to be priced between 3 yuan and 3.3 yuan, or 1.7 times to its book value. That compares to the average price-to-book ratio of 1.8 for most of the nation's listed mid-sized lenders.

"Given the current weak market sentiment, it is not going to be an attractive deal for investors," he said. The benchmark Shanghai Composite Index has plunged nearly 22 percent this year.

However, there are signs that the mainland stock market has started to stabilize. The Shanghai Composite Index, closed at 2572.26 on Friday, after rising for four consecutive days on expectations that the country will maintain its loose macroeconomic policy to prevent an economic slowdown.

The mid-sized lender's IPO follows Agricultural Bank of China's record-breaking float earlier this month. It also comes at a time when most of the Chinese lenders are planning to raise funds from the markets, and also amid apprehension that the issues would drain market liquidity.

Everbright Bank feels that the size of the Shanghai offering is apt and has no plan in the near term to raise funds from the Hong Kong market, a source close to the lender told China Daily.

The source said that the lender will decide on floating its shares in Hong Kong based on the overall market conditions and its future fund requirements.

The country's securities regulator said on Thursday it would review the bank's IPO on July 26. In its preliminary prospectus Everbright Bank said it planed to issue 6.1 billion shares in Shanghai without mentioning the price for the share sale. If the over allotment options are fully exercised, the size of the share offering will increase to 7 billion shares.

"The deal would cement the bank's capital base and support future business expansion and also help meet tighter regulatory requirements," the bank said.

The lender made a profit of 7.6 billion yuan last year, up 4.5 percent from a year earlier.