The President of CNU Invites You to Attend a Lecture: Zhou Xiaozheng Comments on Hot News

The President of CNU Invites You to Attend a Lecture: Zhou Xiaozheng Comments on Hot News

The fifth session of The President Invites You to Attend a Lecture was held an the Lab Building auditorium on May 7 evening, at which Zhou Xiaozheng, the 1977 graduate of CNU and a renowned sociologist, commented on the hot news in China in 2008-2009. The lecture was hosted by Guo Ling, an aid to the President of CNU and a post-graduate student.

Prof. Zhou started from social classes and migrants to talk about social trends in China, and he referred widely to both history and present, theories and realities, to talk about a series of social issues, including China s education system, the May 12 earthquake, the 2008 Beijing Olympics, the stock market volatility as well as population and environment problems, in a narrative and humorous way.

As Zhou put it, looking back is aimed at moving forward . Through analysis of the issues, he broadened the vision of CNU students and provided more nutrition for CNU students to grow. The lecture was conducted in a lively atmosphere, and many students stood there to the end of Zhou s speech. Zhou s knowledge and sense of humor mixed perfected with his audience s attention and passion, and the originally-scheduled two-hour speech was prolonged into a four-hour one to end as late as 11 o clock in the evening.

Prof. Zhou was born in Beijing in 1947 and is a renowned sociologist, whose title includes President of Laws and Sociology Institute of the People s University of China, the writer for national resource report, the leader for National Natural Sciences Foundation Program and a special commentator at the China Central Television.

Zhou also undertakes many other jobs, including being a guest speaker at the Focus on CCTV, the China People s Radio as well as other local channels and radios. 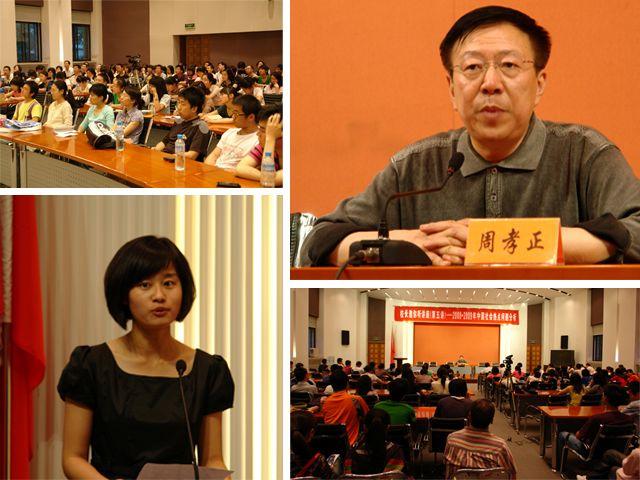