An unrelenting rise in the cost of raw materials is cutting textile corporate profits, in some cases, pushing up consumer prices. One glaring example is the sky-rocketing cost of cotton. 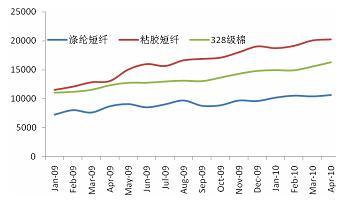 The PMI for May stood at 53.9, 1.8 points down from 55.7 in April, but still higher than the economic expansion boundary of 50 for 15 consecutive months, the National Bureau of Statistics and the Federation of Logistics and Purchasing said. Some analysts said the PMI was probably declining from April due to policy tightening, but the magnitude of the fall was overstated due to seasonal distortion.

Mainland salary increases started this year when Guangdong, Shandong and Jilin cities raised pay by an average of 17 percent because of a labor shortage. Foxconn workers in China will get another pay raise in coming months, on top of an increase that just took effect in response to recent worker suicides, the company said Sunday.

Salaries of Foxconn would be raised in October to 2,000 yuan (US$293) for workers at its plant in the southern Chinese city of Shenzhen. Workers elsewhere in China will get raises in July adjusted for local conditions. Analysts said the moves could trigger a new wave of salary hikes in the "factory of the world" and raise production costs.

Those sectors that are labor-intensive will be hit most as their previous pay levels were actually low.

Besides, the performance of domestic and export markets for Chinese textile products is complicated. The recovery of external demand is fragile and domestic sales growth has experienced a fall, which forced the enterprises to adjust the production pace.

European debt crisis and the consequent sovereign credit risk of developed economies and a new round of global financial market turmoil have limited direct impact on China, but indirect effects can not be ignored. Affected by the debt crisis. The unemployment rate across the 16 countries that share the euro hit a record 10.

'All countries saw a deterioration in growth of output and new orders,' the researchers said, with the rate of contraction in output in recession-hit Greece 'accelerating to its fastest since April last year and to a pace similar to that seen at the height of the global financial crisis.'

On domestic markets, in the first four months of this year, the total retail sales of consumer goods were 4,788.4 billion yuan, a year-on-year growth of 18.1 percent, or up by 3.1 percentage points over that in the same period of last year. It was 0.2 percentage point higher over that in the first quarter of this year. According to the data of 1000 monitoring business surveyed by the Ministry of Commerce, apparel retail sales in April was up 14.6%, but the growth rate was down 0.8 percentage from the previous month.

In the first four months of 2010, the total industrial production value of statistics-worthy Chinese textile enterprises grew 26.69 percent year-on-year to CNY1296.542 billion, 22.43 percentage points higher than the same period last year, but 0.36% and 0.29% lower than the period of Jan.-Feb. and Jan.-Mar respectively, according to the National Statistics Bureau.

Table 1. Contribution to the change in the growth of total production value by sector

In this regard, we propose that the relevant state departments to strengthen the macro-control for cotton and other raw materials markets, such as expanding cotton imports, timely selling the state reserved cotton so as to stabilize the market price of raw materials and ease the pressure on manufactures.