The carbon footprint of the textile and apparel industry can be mitigated by production energy and resource efficiencies.

Over the past few years, climate change issues have moved from the academic arena to front page headlines in mainstream newspapers worldwide. Promoted by weather events such as the European heat wave in 2003, Hurricane Katrina in the United States in 2005 and melting icebergs, climate change has itself moved up from public debates to the political agenda.
Climate Change
Climate change, or global warming, refers to the rise in the planet's overall temperature resulting from the anthropogenic, or human-related, increase of greenhouse gases (GHGs), mainly expressed in carbon dioxide (CO 2) equivalents, in the atmosphere.
The magnitude of the problem has been addressed by the Intergovernmental Panel on Climate Change. Since the onset of the Industrial Revolution, more than 300 gigatonnes of carbon have been released into the atmosphere. Stabilization of the atmospheric concentration of carbon dioxide at around 450 parts per million (ppm) by volume may involve warming exceeding 2 C.
These numbers have often been cited by the Kyoto Protocol, which has targeted a 5.2-percent reduction of GHG emissions from 1990 levels by 2012. A further call for additional reductions of between 60 and 80 percent from 1990 emissions by 2050 has led to the adoption of 2050 targets by the United Kingdom of 60 percent; France, 75 to 80 percent; and California, 80 percent. 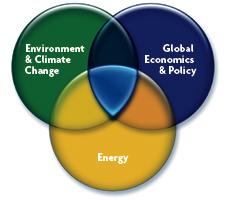 According to leading scientists, the planet is in its danger zone with CO 2 concentrations higher than 350 parts per million (ppm). The red line for danger has already been passed, as the atmospheric concentration of CO 2 measured 390 ppm in 2009, with an annual increase of 2.5 ppm.
The climate changes to come will likely threaten access for many people to shelter, food, and water. Additionally, with the irreversible damage to the world's ecosystems, including the extinction of a large portion of Earth's vulnerable species, diseases will have the most extensive negative effects civilized humans have ever experienced.
The significance of climate change implies urgency that policy instruments soon will have to be deployed worldwide. So climate change has been identified as one of the greatest challenges facing nations, governments, business and citizens over future decades.
The Energy Challenge
Today, 80 percent of global energy usage relies on fossil fuel. Conservation and improvements in industrial energy, material efficiency and reductions are the lowest-cost near-term measures to reduce that usage. It also is possible to switch from fossil fuels to alternative energy sources such as nuclear, wind, solar, biomass, and others; but the availability is limited, and not yet all cost-effective. Taxes and subsidies are likely to become more attractive for new investments in carbon mitigation, and new regulations will be established.
Textiles And The Carbon Footprint
A carbon footprint is the total amount of CO 2 and other GHGs emitted over the full life cycle of a process or product. Carbon footprints are calculated using a life cycle assessment method, also referred to as the cradle-to-grave approach. It takes into account energy inputs and emission outputs throughout the whole production chain from exploration and extraction of raw materials to processing, transport, final use and disposal.
The textile industry is one of the biggest GHG emitters on Earth, owing to its huge size and scope. Many processes and products that go into the making of fibers, textiles and apparel products consume significant quantities of fossil fuel. Apparel and textiles account for approximately 10 percent of the total carbon impact. The estimated consumption for an annual global production of 60 billion kilograms of fabrics boggles the mind: 1 trillion kilowatt hours of electricity and up to 9 trillion liters of water.
The ethical agenda of retailers has been dominated by environmental issues. Marks & Spencer, United Kingdom, and Walmart, Bentonville, Ark., are two companies that are setting the pace for the whole industry. So, along with investments in corporate social responsibility and projects to improve the general living conditions of workers, the retailers are taking the necessary steps to push suppliers to improve sustainability and offering environmentally responsible products with reduced carbon footprints. And this offers a way for organizations and individuals to assess their contribution to climate change and promote it in the media. They are increasingly concerned with emissions across their entire supply chain. 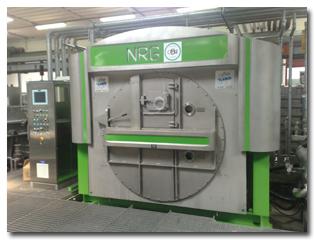 Flainox's NRG rotary dyeing machine achieves a 23-percent reduction of CO 2 equivalent and lowers a textile plant's energy costs by 19 percent.
The U.K. fashion retail market already uses the world's first carbon footprint label for clothing - the Carbon Reduction Label developed by the Carbon Trust. It has been calculated that the carbon footprint of a basic men's large 155-gram white T-shirt produced in a traditional way without using renewable energy would be 6.574 kilograms (kg) of CO 2; for the same T-shirt made in India in a factory that uses 100-percent renewable energy and organic cotton from India as well, it now stands at 671 grams, which represents a 90-percent reduction in CO 2 emissions.
The direct carbon footprint contribution of manufacturing plants from yarn to customer including spinning, knitting, dyeing, finishing, cutting and sewing, plus transportation to the distribution center could reach up to 12.5 kg of CO 2 per kg of fabric. The carbon emissions of T-shirt manufacturing in CO 2 equivalents could be more than 12 times the product weight. Considering that the carbon footprint of steel is about 2 kg of CO 2 equivalents per kg of steel, the pressure coming down from the supply chain to the full industry is understandable: The elephants are among us.
The textile and clothing industry's carbon footprint is in the hot spot.
Sustainable Development At Flainox
For the textile machinery industry, the real challenge is to design carbon mitigation solutions by being more eco-efficient and lowering operating costs for a greener product profile. With regard to climate change figures and facts, Italy-based dyeing and finishing machinery manufacturer Flainox S.r.l. has adopted a sustainable development strategy for meeting the needs of present- and future-generation requirements without jeopardizing the future.
Sustainable development requires some shifts in thinking, consumption, design review, production patterns and business approach. The carbon footprint of the company's Universal NRP dyeing machine has been investigated over its complete life span, from the extraction of raw material and manufacturing to the use of the end-product by consumers and end-of-life processes. The impact analysis was limited to emissions that have an effect on climate change.
The study's conclusion put a strong focus on hot spots for eco-design review and eco-efficiency improvements leading to the new energy concept of Flainox's NRG rotary dyeing machine. The carbon footprint mitigation achieved with the new Universal NRG has resulted in a 23-percent CO 2-equivalent reduction and provided utility and energy cost savings of 19 percent by the textile plant.