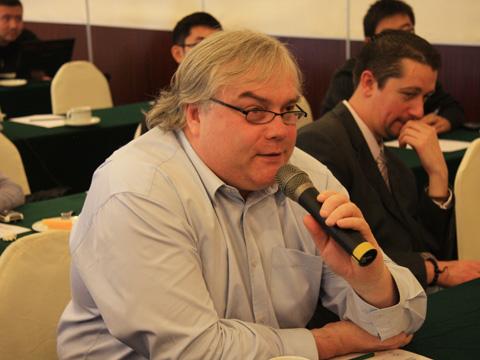 "The key factors with any industry are product development, innovation... specifically here what we'll see added to microblogging services will be advertising, real-time searches, e-commercing, games."

As Twitter-like service, Microblog, is becoming more popular in China, the competition in the industry has also been fiercer.

China's major web portals, such as Sina, Sohu and Tencent, have all started microblogging services, and many other websites want to provide such services.

Mike Bastin, a Marketing and Management teacher at Tsinghua University, who specializes in Chinese business culture, said the expansion of the industry is certain despite fierce competition.

Therefore, in order to win the battle, companies must keep their services upgraded, said Bastin.

"The key factors with any industry are product development, innovation..." he said. "Specifically here what we'll see added to microblogging services will be advertising, real-time searches, e-commercing, games."

Sina Microblog, which has taken a lead in the country's microblogging industry, has recently announced increased investment and plans to upgrade the service with instant communication and group functions.

Sohu and Tencent also revealed plans to expand their activities in the microblog market.

Over the past year, microblogging has become wildly popular in China, with some 65 million China-based microblog accounts registered by the end of 2010 - and the number is growing by more than 10 million each month, according to the Data Center of China Internet.

However, some analysts said the surge of registered users for microblogging services will not necessarily translate into profits.

Wen Yijun, an analyst with Oriental Securities in Beijing, said the country's microblog market is still at the stage of customer development, and a larger number of loyal users will be the real turning point for the microblog market.

Bastin suggests companies offer microblogging services to ignore the temptation to reap instant profit, and look at the long term with continued investment in the brand.