Desperate Mom's Crawl on Street Was Just A Hoax

Desperate Mom's Crawl on Street Was Just A Hoax 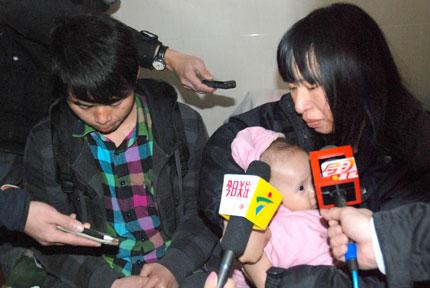 Shi Jinquan (left) and Xie Sanxiu face the media after their lie was exposed in the undated photo. [Photo: Shanghai Daily]

The story of a mother in Guangzhou City crawling on the street to win a promised 20,000 yuan (US$3,050) donation for her sick baby touched many people's hearts when they found out it wasn't going to be paid.

The offers of money came flooding in when they heard of the woman's plight.

But the story turned out to be a hoax.

Shi Jinquan, who works for online forum Tianya.cn, admitted he made up the story to help the mother raise money, the Guangzhou Daily reported on Sunday.

Xie Sanxiu, whose seven-month daughter has eye cancer, said she was sorry for the lies and was willing to return all the donations, about 280,000 yuan in total.

"I appreciated so many people have been helping with my kid, but I did not expect Shi's idea would produce so many negative effects," the mother told the newspaper.

She said the family income of 2,000 yuan a month meant that they were too poor to be able to afford the girl's medical bills.

Shi told the newspaper that he had noticed Xie's online appeal for help and got in touch. He then used another name to respond that he would donate 20,000 yuan if Xie would crawl on street.

Two days later, when Xie, carrying her daughter, crawled along Guangzhou Avenue for 1,000 meters, Shi, as planned, did not show up.

Passersby were deeply moved by what was going on and began to donate money for the baby girl's treatment.

It seemed a perfect end to Shi's plan until Tianya found out that Shi and the "donor" were the same person and the elaborate hoax was uncovered.

Xie has asked people not to donate any more money for her daughter's treatment.