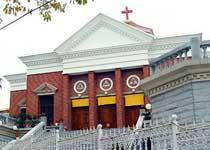 It is free to go to the island. Sunlight rock, garden of bean village, carving characters in the hall, 80 yuan of organ hall coupon ticket. Construct 60 yuan in the sea paradise.