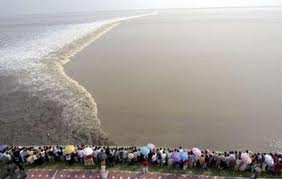 Qiantang River is the biggest in Zhejiang Province, running from the west to Hangzhou Bay in the east. It serves as a river hinge, playing an important role in the water-transportation between the east and the west. It is encircled by a group of economically booming cities including Shanghai, the leading industrial and commercial hub of the country, and Ningbo, one of China's leading port cities. The extraordinary surging tide of the River is a world-renowned natural wonder caused by the gravitational pull of the stars and planets. The centrifugal force produced by the rotation of the earth and by the peculiar bottleneck shape of Hangzhou Bay makes it easy for the tide to come in, but difficult for it to ebb.

The soaring tide of the Qiantang River is such a marvelous spectacle that only the Amazon River's surging tide rivals it! Annually, millions of people from both home and abroad flock there to watch it on the eighteenth day of the eighth lunar month (also around the Mid-Autumn Day). When the surging tide comes, the water can rise up to a height of 30 feet and the noise it generates sounds like thunder, or thousands of horses running. Various activities will also be held to celebrate the annual Tide - Watching Festival, according to local custom. In terms of its history, the custom of watching the bore tide has happened for more than 2000 years. It first appeared during the first century. Then, it became popular in the Tang Dynasty (about 7th -13th century). Yangong town in Haijing 45 km (about 28 miles) from Hangzhou is the best place to watch the Qiantang Tide.

The rushing tide can be dangerous if you are careless.So it's best to listen to the advice of the local policemen there whose job it is to ensure your safety and security.

Crossing the river is the Qiantang River Bridge. It is China's first self-designed and self-built bridge, which took from April 1934 to Sept 1937 to complete. the bridge is comprised of its main body and the bridge approach, stretching a distance of 1453 meters (4767 feet). It is also the first modern double - layer bridge in the country. The upper layer of the bridge is highway and the layer below is railway. Qiantang River Bridge is designed by the famous Chinese bridge engineer Mao Yisheng, who defied the words spoken by foreigners that it was impossible to construct a bridge in such a spot, and who made a great contribution to the Chinese bridge building industry. Looking out from the Six Harmonies Pagoda, one can get a panoramic view of the mighty Qiantang River, the majestic Qiantang River Bridge, and the surrounding landscape.