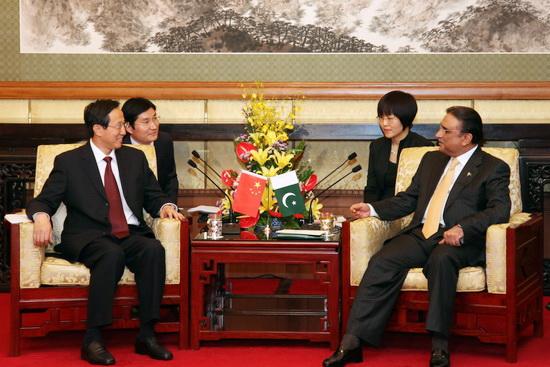 On July 8, Han Changfu, Minister of Agriculture met with the visiting Pakistani President Zardari in the Diaoyutai State Guesthouse. The two sides exchanged views on agricultural development and cooperation in a cordial and friendly atmosphere.

Han Changfu said that the two countries supported each other in multilateral areas and vigorously promoted the bilateral collaboration. In the agricultural area, scientific and technological cooperation has been strengthened and agricultural trade has been expanded, thus strongly boosting the agricultural and economic growth.

Han Changfu stressed that agricultural cooperation was considered as an important part of the bilateral economic and trade relations. In recent years, the two countries have launched a series of cooperation in hybrid rice, tea, breeding and extension of quality maize and cotton varieties, and strengthened the cooperation in agricultural machinery and chemicals. He hoped that the two sides, guided by the principle of reciprocity and mutual benefit, could stabilize and promote the existing cooperation mechanism to further strengthen the bilateral trade.

Zardari expressed his admiration to China s agricultural achievements and felt delighted to see the progress in Pakistan-China agricultural collaboration. He also expressed his hope of strengthening the cooperation in breeding and production of hybrid rice as well as water-saving agriculture. Zardari added that Pakistan would encourage and support the operation of Chinese agricultural enterprises in his country.