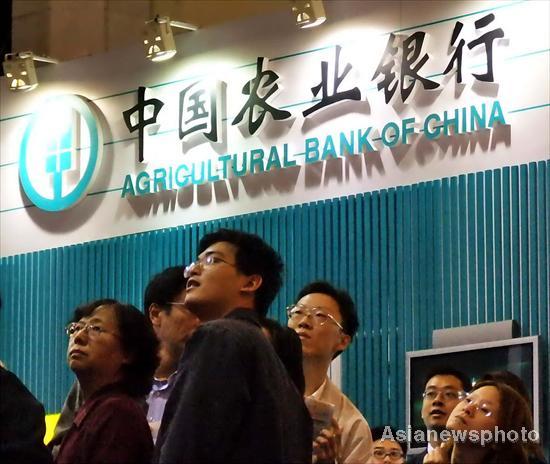 Agricultural Bank of China has enough strength to sustain future growth due to its strong rural focus. [China Daily]

BEIJING - Agricultural Bank of China (ABC) is likely to launch its initial public offering (IPO) in June or July after its plan got the approval from the State Council, a source familiar with the matter said on Wednesday.

The bank has started talks with foreign and domestic lenders to arrange its public issue in Hong Kong and Shanghai.

More than 20 banks have received invitations to participate in the bidding process for the IPO mandate, the source told China Daily on condition of anonymity.

"Top policymakers have approved Agricultural Bank's plans to reform the rural finance unit, something that had slowed its listing plan in the past. The bank is now expected to complete the IPO process in June or July," the source said, without elaborating.

Even though details are still sketchy, the source said the nation's third-largest lender by assets could raise around $22 billion from the IPO, with the Hong Kong tranche being bigger than that of Shanghai.

The mega IPO is expected to be similar to the one floated by the Industrial and Commercial Bank of China in 2006 to raise around $21.9 billion. It has already evoked keen interest from domestic and overseas investment banks.

China International Capital Corp and Citic Securities, the advisers for ABC's preparatory work for the IPO, are likely to get the mandate for the lender's A share offering, the source said.

Market watchers are also keeping tabs on whether ABC would emulate the other three big State-run lenders, by roping in a foreign strategic investor ahead of the IPO.

Sources, however, maintain that ABC may not be inclined to bring on board a foreign investor despite the obvious advantages of better risk control expertise and corporate governance from a long-term perspective.

The agriculture-focused lender is generally considered to be weaker than the other big State-run lenders, as it has been largely supporting rural development for several years through government-directed lending programs.

The bank has enough strength to sustain future growth due to its strong rural focus. Rural areas are considered to be the new engines for economic growth as the urbanization drive gathers momentum in China, Xiang Junbo, chairman of the bank said in a recent interview to this paper.

As part of the plan to keep its books in order ahead of the share float, ABC wrote off some 800 billion yuan ($117 billion) of bad debts in 2008 and got a $19 billion capital injection from Central Huijin, the domestic investment arm of the nation's sovereign wealth fund.

With non-performing loan ratio and capital adequacy ratio, the two major indicators for financial health, standing at 2.91 percent and 10.07 percent by the end of 2009, the bank is in a better position that the other three lenders before they got listed between 2005 and 2007.